The Price of Paradise and The Value of Hawaii 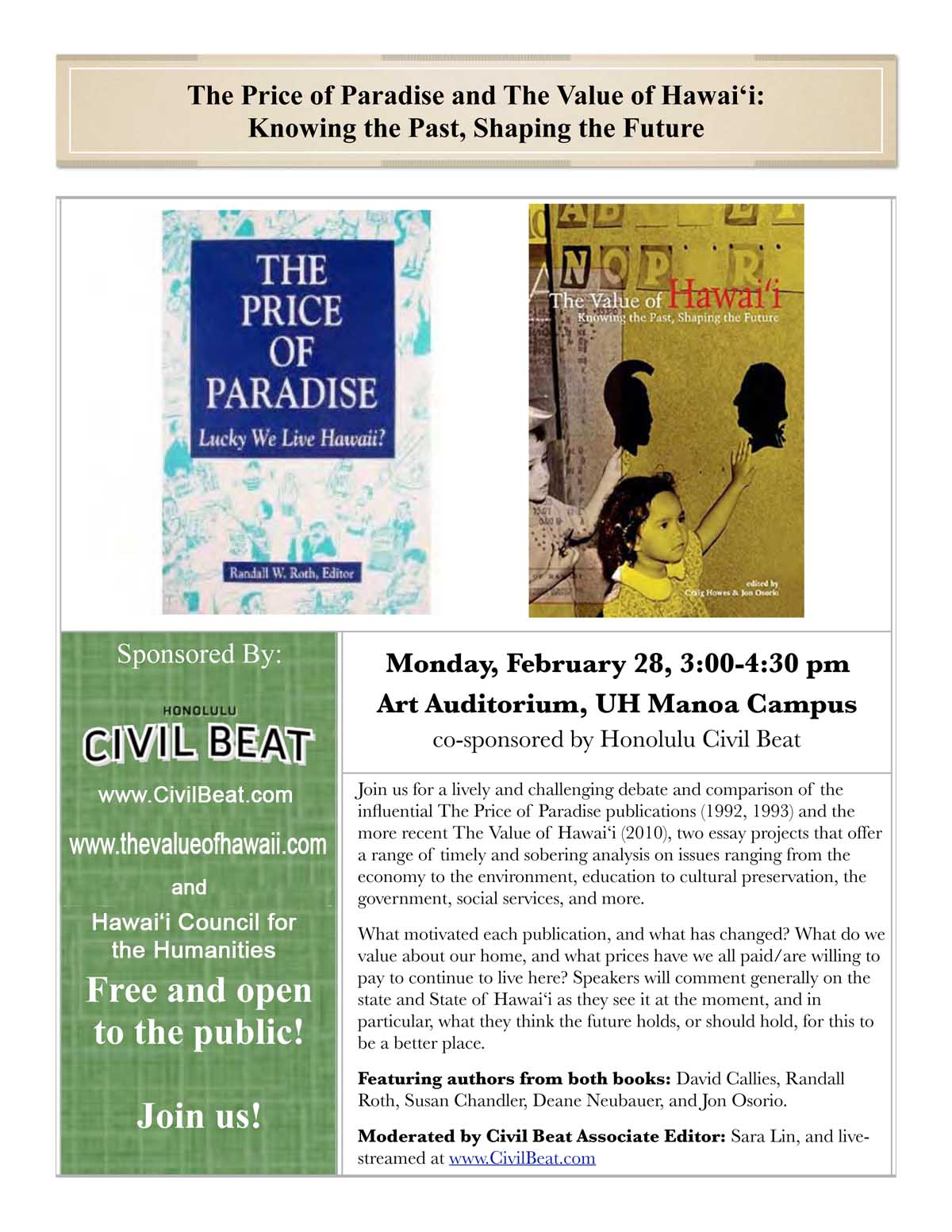 Join us for a lively and challenging debate and comparison of the influential The Price of Paradise publications (1992, 1993) and the more recent The Value of Hawaiâ€˜i (2010), two essay projects that offer a range of timely and sobering analysis on issues ranging from the economy to the environment, education to cultural preservation, the government, social services, and more.

What motivated each publication, and what has changed? What do we value about our home, and what prices have we all paid/are willing to pay to continue to live here? Speakers will comment generally on the state and State of Hawaiâ€˜i as they see it at the moment, and in particular, what they think the future holds, or should hold, for this to be a better place.

David Callies is the Kudo Professor of Law at William S. Richardson Law School, University of Hawaiâ€˜i, and an elected member of the College of Fellows, American Institute of Certified Planners; American College of Real Estate Lawyers; and the American Law Institute. He holds the following degrees and honors: A.B., Depauw University; J.D., University of Michigan; LL.M., Nottingham University; Life Member, Clare Hall, Cambridge. He is past chair of: Academics Forum, International Bar Association; Section of State and Local Gov. Law, American Bar Association; Section of State and Local Government Law, American Association of Law Schools; and Section of Real Property and Financial Services, Hawaii State Bar Association. He is national co-editor (with Tarlock), of the Land Use and Environmental Law Review. The author of more than 70 articles, his casebooks on property (LexisNexis) and land use (Thomson/West) are in their 3rd and 5th editions, respectively. The second edition of his Hawaiâ€˜i land use book, Regulating Paradise: Land Use Controls in Hawaii, was published in 2010 by the University of Hawaiâ€˜i Press. He was awarded a University of Hawaiâ€˜i Regents Medal for Excellence in Teaching in 2009.

Randall Roth has been a member of the faculty at three law schools and was named Professor of the Year at all three. At UH he has also received the Regents Excellence in Teaching Award and the Clopton Award for Outstanding Community Service. In 2000 the Honolulu Star-Bulletin included Roth on its list of "100 Individuals Who Made a Difference in Hawai'i during the 20th century" and in 2005 the City of Honolulu's Centennial Commission put Roth on its list of "100 Who Made Lasting Contributions During Honolulu's First 100 Years." In 2009 Morehouse College presented Roth with the Gandhi, King, Ikeda award for pursuit of social justice by non-violent means.

Susan M. Chandler is the Director of the College of Social Sciences Public Policy Center and a Professor of Public Administration at the University of Hawaiâ€˜i at MÄnoa. From 1995 to 2002 she served in Governor Benjamin J. Cayetanoâ€™s administration as the Director of Human Services. From 1976 to 2006 she was a Professor in the UHM School of Social Work. She teaches in the areas of public policy, network governance, community and organiÂ¬zational change, and policy implementation. She recently completed a book with Richard Pratt, Backstage in the Bureaucracy: Politics and Public Services (U of Hawaiâ€˜i P, 2010).

Deane Neubauer is Professor Emeritus of Political Science at the University of Hawaiâ€˜i at MÄnoa. He also currently serves as Senior Consultant to the International Forum for Education 2020 Program of the East-West Center, and as Senior Research Fellow for the Globalization Research Center, UHM. His research focus is on policy and globalization, with particular interests in health and educational policy.

Jonathan Kay Kamakawiwoâ€˜ole Osorio, PhD, is Professor of Hawaiian Studies at the University of Hawaiâ€˜i at MÄnoa, a historian of the Hawaiian Kingdom, and a practicing musician and composer. He has been an advoÂ¬cate for the restoration of Hawaiâ€˜iâ€™s political independence, and writes about the sovereignty movement in Hawaiâ€˜i. He and his wife Mary live in PÄlolo, and have sent all of their children to public schools and Kamehameha High School.