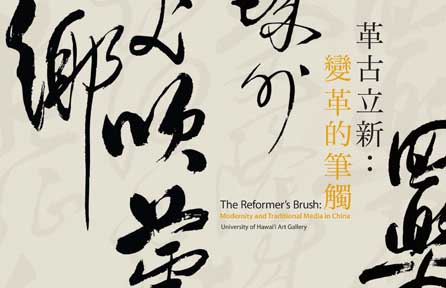 A selection of films that complement "The Reformerâ€™s Brush" exhibition at the UH Art Gallery will provide important insight into the history, culture, and lives of people around the time of the Xinhai Revolution in China.

Each film is preceded by a short educational presentation.

A dramatic history of Puyi, the last of the emperors of China, from his lofty birth and brief reign in the Forbidden City, the object of worship by half a billion people; through his abdication, his decline and dissolute lifestyle; his exploitation by the invading Japanese, and finally to his obscure existence as just another peasant worker in the Peopleâ€™s Republic.

Adapted from Shakespeareâ€™s The Two Gentlemen of Verona, this film is set in the changing society of 1920s China. Hu Luting and Bai Lede are both graduates from the Shanghai Military Academy. Hu is sent to Canton under General Shi's command. Shi Luohua, the generalâ€™s daughter, falls in love with Hu. Later, Bai joins his friend in Canton and feels attracted by Miss Shi. From then on, two young men become rivals.

The story was meant by Lao She as a commentary on what he saw as the tradition-bound society in which he lived. In the 1920s, a young, hardworking peasant arrives in Beijing to become a rickshaw boy at a time when the city is torn by dueling warlords. His fortunes rise and fall but he is destined to suffer because he is always at the mercy of his environment.

Wang is an aging street performer known as the King of Masks for his mastery of the rare and dying art of Sichuan mask-changing, but he lacks a son to pass his skills on to. Then, one night after a performance, he is sold a young boy by a slave trader posing as the boyâ€™s parent. â€œGrandpaâ€ finds new joy in life as he plans to teach â€œDoggieâ€ his art. All is well until Doggie turns out to be a girl.

Ticket Information
Sundays, March 6 - April 3, at 3:30 p.m.; Admission is free. Seating for films is on a first-come, first-served basis. The schedule may be subject to change. Parking fees may apply.

Event Sponsor
Department of Art and Art History, and the College of Arts and Humanities, Mānoa Campus