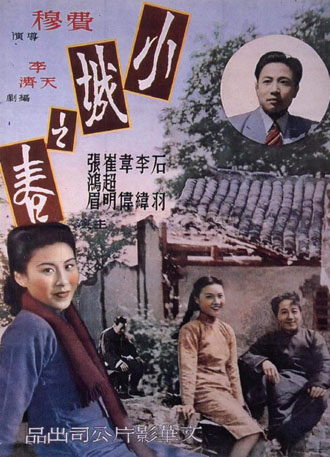 Join the East Asian Film Society as we explore the Chinese leftist films of the 1930s and 40s. The final film in our series is Spring in a Small Town, voted by the Hong Kong Film Association as the greatest Chinese film of all time in 2005. This film will be introduced by special guest Agnes Zhuo Liu from the UH Manoa East Asian Languages and Literature department.

Taking place in a ruined family compound after the war, Spring in a Small Town tells the story of the once prosperous Dai family. The husband and patriarch, Dai Liyan (Shi Yu) is an invalid, and spends his days in the courtyard nostalgic for the past. His marriage to Zhou Yuwen (Wei Wei) has long been rendered loveless, though both still feel concern for the other. Liyan's young teenage sister Dai Xiu (Zhang Hongmei), meanwhile, is too young to remember the past, and stays cheerful and playful in the ruins of her home.

Into this dreary but unchanging existence comes Liyan's childhood friend Zhang Zhichen (Li Wei), a doctor from Shanghai and a former flame of Zhou Yuwen before she ever met her husband. The rest of the film details Zhou Yuwen's conflicting emotions between her love for Zhang, and her loyalty to her husband and his family.