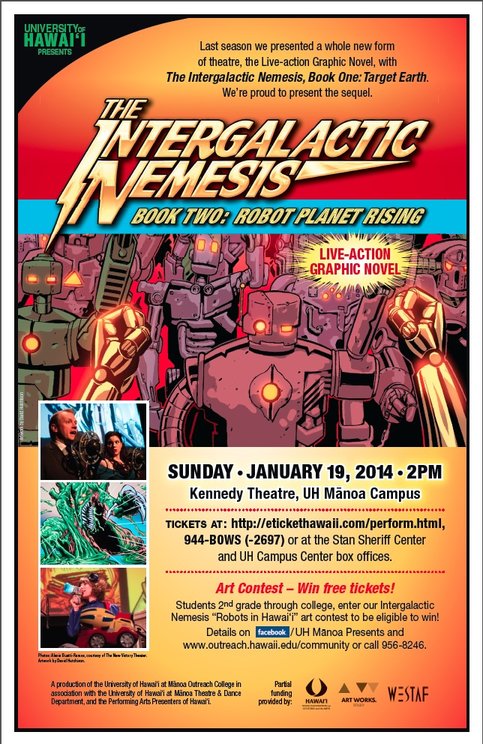 Like "Elvis coming back to play Tupelo in 1956 or Marvin Gaye selling out his hometown`s Kennedy Center in `72." --The Austinist

"Brilliant... The ending makes you want to high-five your neighbor in anticipation of the next installment." --CultureMap Austin

"I felt like the nerdy little 10-year-old kid that I once was, bouncing off the walls and grinning as I talked to my friend about my favorite parts." --Austin Post

The world tour of the cult favorite that`s played a limited run on Broadway and sold out the Kennedy Center now has a sequel...

Last season we presented a whole new form of theatre, the Live-Action Graphic Novel, with The Intergalactic Nemesis, Book One: Target Earth. Now, that production is in the midst of a multi-year world tour. They`ve been featured on NPR and CONAN. So it is with extreme pride that we present the sequel. Here`s how it works:

The creators have taken the artwork from an original comic-book story, removed the word balloons, and then project that art panel-by-panel on our two-story-high video screen while three actors voice all the characters, one performer creates all the sound-effects, and a keyboardist performs the score. LIVE.

The year is 1933. When the robot emissary Elbee-Dee-Oh disappears in deep space, it`s up to Molly Sloan to rescue him. If only it were that simple. Because at that same time, and unbeknownst to her, her former fiancÃ© Dr. Lawrence Webster has miraculously arrived on Robonovia, the Cerebretron is malfunctioning, Timmy has only just begun to master his telekinetic powers, a sinister robot named Alphatron is up to something terribly nefarious, and the duplicitous Soviet spy Natasha Zorokov has followed Dr. Webster through the Galactascope. Will it all get sorted out? Or is there another, more evil, thread to this complex tapestry? There`s only one way to find out! Buy tickets now!

For the kid in everyone!

A production of the University of Hawaii at Manoa Outreach College. Part of a Performing Arts Presenters of Hawaii tour. Partial funding provided by the Hawaii State Foundation on Culture and the Arts, the National Endowment for the Arts, and the Western States Arts Federation.