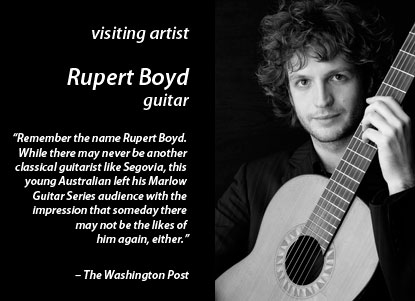 Australian guitarist Rupert Boyd is acclaimed as one of the most talented guitarists of his generation. He has been described by The Washington Post as "truly evocative," and by Classical Guitar Magazine as "a player who deserves to be heard." His performances have taken him across four continents, from New YorkÂ’s Carnegie Hall, to the Barcelona Guitar Festival in Spain, Strings-139 Festival in China, Festival de Musique Classique in France, and every state and territory in mainland Australia.