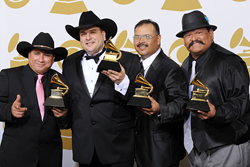 Combine a hefty helping of Tex Mex conjunto, simmer with several parts Texas rock, add a daring dash of well-cured blues, and R&B riffs, and youâ€™ve cooked up the tasty TexManiacs groove. Not to say that this groupâ€™s sound is for musical gourmets onlyâ€¦ it is, â€œhip music everyone can relate to.â€

LOS TEXMANIACS feed the masses, with only the best in musical fare. Founded by MAX BACA (bag sexto, vocals), the TexManiacs are a product of his wide-ranging experience touring and recording with everyone from his fatherâ€™s family conjunto, Flaco JimÃ©nez , the original texas Tornados, Los Super Seven and the Rolling Stones.

Los TexManiacs are 2010 GRAMMYÂ® winners for their album â€œBorders y Bailesâ€ a project that was requested by the Smithsonian Folkways project.

Winner of four GRAMMYÂ® Awards and the 2013 Na Hoku Award winner Bobby Ingano is internationally regarded as the best steel guitarist in Hawaii. He has toured with Taj Mahalâ€™s Blues Band and many others. He is joined by Kaipo Ah Sing on guitar and vocals, and Alan Ah Sing on bass.

Ticket Information
Tickets on sale now at the Hawaii Theatre Box Office: in person, by phone at 528-0506, or online at hawaiitheatre.com