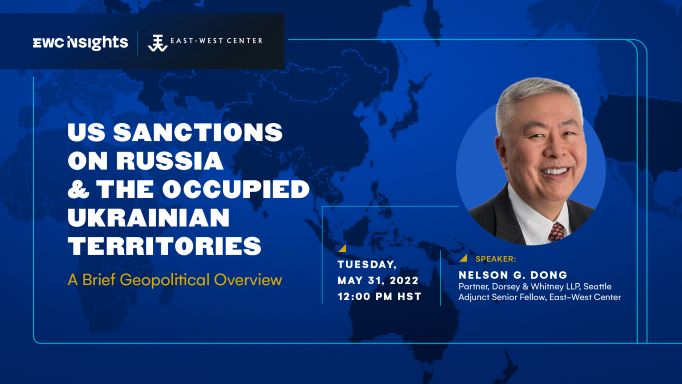 
US SANCTIONS ON RUSSIA & THE OCCUPIED
UKRAINIAN TERRITORIES:
A BRIEF GEOPOLITICAL OVERVIEW
featuring
Nelson G. Dong
Senior Partner, Dorsey & Whitney LLP, Seattle
Adjunct Senior Fellow, East-West Center
The Biden Administration has sought to balance a firm and aggressive response to the Russian invasion of Ukraine without triggering any direct military confrontation between Russian and NATO forces. One of the principal elements of the US response has been an unprecedented array of US economic sanctions and export control measures directed against Russia, Belarus and the occupied Crimean, Donetsk and Luhansk regions of Ukraine. This talk will review the nature and extent of these US sanctions and export controls, examine their effects on their targets, and discuss other national actors that could potentially help Russia to avoid or mitigate those intended effects and how such counter-moves might affect future US foreign relations with Russia and those other nations in the Indo-Pacific region.


Nelson G. Dong is a senior partner in the Seattle office of Dorsey & Whitney LLP, an international law firm, and heads its National Security Law Group and is co-head of its Asia Group. He advises companies, professional societies, universities and research organizations on export controls, economic sanctions, national security and international trade and investment matters. He is an author and teacher on international technology law issues and has been an adjunct professor of international law at the Seattle University Law School and a guest lecturer at the University of Washington Law School.

Nelson was a White House Fellow and U.S. Department of Justice official in the Carter Administration responsible for international and national security matters, and a federal prosecutor in Boston. He is an Adjunct Senior Fellow at the East-West Center in Honolulu, a director of the National Committee on US-China Relations in New York City and the Washington State China Relations Council in Seattle, and an active member of the Council on Foreign Relations and the Committee of 100. Nelson is a graduate of Stanford University and the Yale Law School and has served as a trustee of Stanford University.

Ticket Information
Free and Open to the Public. Registration required.