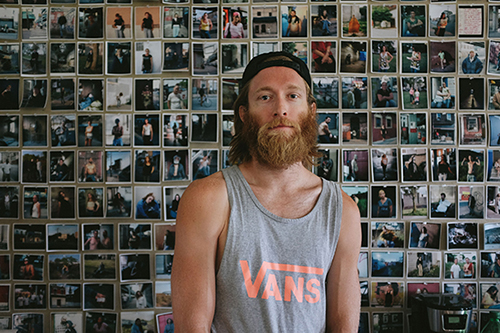 Jeffrey Stockbridge presents the evolution of Kensington Blues. Spanning 5 years, from 2008-2013, Stockbridge photographed and interviewed people struggling with addiction along Kensington Avenue in North Philadelphia. Beginning as a personal project, Kensington Blues later became a blog and eventually a book. Featuring audio recordings, videos and photographs, Stockbridge will discuss how the project changed over the years as he developed a strong connection with the neighborhood. More at kensingtonblues.com.

BIO : Jeffrey Stockbridge is a photographer and fine art printer based in Philadelphia, Pennsylvania. Stockbridge graduated from Drexel University with a BS in Photography in 2005. His work has been exhibited at The National Portrait Gallery in London, The Philadelphia Museum of Art, The Delaware Center for Contemporary Arts, and the Delaware Art Museum. In 2010, Stockbridge was nominated for the Taylor-Wessing Photographic Portrait Prize and he was recently shortlisted for both the Lange-Taylor Prize and the Center For Documentary Studies First Book Prize. In 2014, Stockbridgeâ€™s series Kensington Blues, was accepted into Review Santa Fe and awarded a Critical Mass Top 50 Winner by Photo Lucida. Stockbridge is a recipient of a Pennsylvania Council on the Arts Grant, an Independence Foundation Fellowship Grant and a CFEVA Fellowship. His work has been featured in print and web publications such as The NY Times Magazine, Time Magazine, National Geographic, The Telegraph UK, LensCulture, Conscientious, and Feature Shoot. Stockbridgeâ€™s book Kensington Blues was released in 2017.