For more information on each speaker and their research interests please see the flyers below. 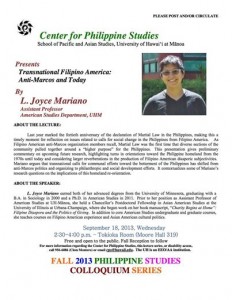 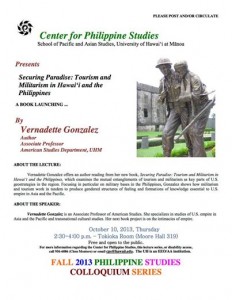 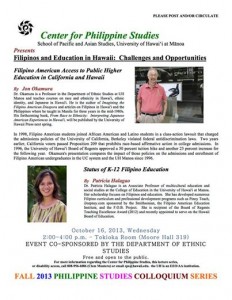 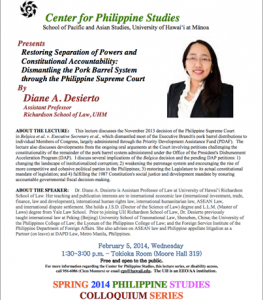 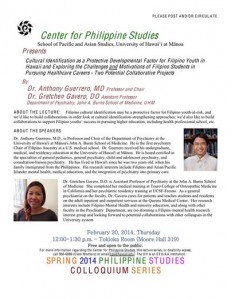 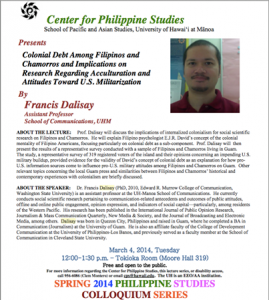 A warm mahalo to all of our CPS Colloquium speakers! 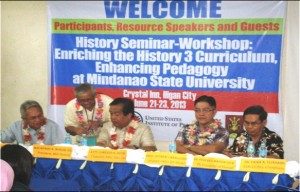 Under the auspices of the US Institute for Peace (USIP), CPS conducted the first of three workshops for history teachers from Mindanao State University on June 21-23, 2013. This workshop is part of the two-year project entitled “Teaching Enriched History and Bridging Cultures: In Search of Peace in Mindanao, Philippines.” Dr. Federico Magdalena, Project Investigator, went to Iligan City to supervise the successful conduct of the workshop. He was assisted by Dr. Samuel Anonas, Dr. Faina Abaya-Ulindang, and Dr. Jamail Kamlian, project coordinators from MSU.

The project’s objectives are: (1) to enhance the capacity of selected history teachers, and (2) the early prevention of violent conflicts, and promoting a culture of peace among students who belong to Christian, Muslim and Lumad (term for tribal communities who are neither Muslims nor Christians) ethnic groups.

A principal concern of the project is to promote peace-building efforts in sync with national and local initiatives, such as the MSU program of integration for which the university owes its reason for being. MSU is the second largest state university founded in 1961 to address the educational needs of the Muslims and tribal communities in Mindanao, and make them productive citizens (rather than problems) of the nation. The project goals also coincide with the current peace talks between the Moro Islamic Liberation Front and the Philippine government, now at its tail-end. The peace process is connected with the Moro (Muslim) aspiration for self-government in Mindanao, which has been going on for the last four decades.

The workshop brought 44 teachers from six MSU campuses to listen to lectures, and design an innovative curriculum where students learn knowledge and skills of local history (history of Muslims and Lumad peoples), and peacemaking. Through this curriculum – enriched with peace education – the students will acquire values of trust, cooperation, and peaceful co-existence in a multicultural setting. The wide social distance between Muslims, Christians, and Lumads will hopefully diminish. Eventually, they serve as bridges of cross-cultural understanding in their own communities. Such change is resonant with the mandate of MSU to integrate the Muslims and Christians and bring about harmony, peace and development in the southern Philippines.

MSU President Macapado Muslim, who graced the opening ceremony, congratulates the organizers for inculcating peace concepts in the curriculum. He believes that multiculturalism needs a culture-sensitive education not only for Muslims but for Christian as well. Dr. Datumanong Sarangani, former Executive Vice President of MSU and one of the speakers, says the workshop is “long-time coming,” and is very much welcome.

After the workshop, the teachers returned to their respective stations – ready to chart a new direction for teaching local history. The enhanced curriculum will be pilot-tested for four semesters to see its impact on student attitudes and behaviors. An evaluation and monitoring scheme shall be implemented, based on a format using pretest and posttest, to find out if this curricular change is going to make a difference.

Details of the workshop are found Here.

USIP is an independent, nonpartisan institution established and funded by Congress to increase the nation’s capacity to manage international conflict without violence. Its Grant Program increases the breadth and depth of the Institute’s work by supporting peace building projects managed by non-profit organizations including educational institutions, research institutions, and civil society organizations. 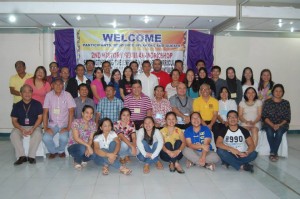 The workshop, conducted on April 23-25, 2014 at Crystal Inn, Iligan City, ended with a resounding success.  This event is a follow up workshop of the first one conducted in June 2013, under the auspices of the UH Center for Philippine Studies in cooperation with Mindanao State University. Both are made possible through a grant provided to CPS by the United States Institute of Peace to enhance the capacity of MSU history teachers in their effort to inculcate peace culture, and develop peacebuilding skills and abilities among their students.  The project team consists of Dr. Federico Magdalena (Project Investigator, UHM), Dr. Faina Abaya-Ulindang (Coordinator for MSU Iligan Institute of Technology), Dr. Samuel Anonas (Coordinator for MSU Marawi campus), and Dr. Jamail Kamlian (Coordinator for MSU Tawi-Tawi campus).

The 3-day event was graced by Dr. Sukarno Tanggol, Chancellor of MSU Iligan Institute of Technology, who gave the opening remarks.  The program closed with a short statement from Dr. Ed Ignacio, Vice Chancellor for Academic Affairs of the same institution.

Forty teachers participated in this workshop. They represent five campuses of Mindanao State University (Marawi, Iligan, Tawi-Tawi, Naawan and Maigo). All of them are involved in the teaching of History 3 (History of Muslims and Lumads) in Mindanao, a course required for all students of MSU.  During the workshop sessions, they assembled in three groups and discussed ways of improving the history curriculum as well as the manual developed for this purpose by some of their co-teachers.  They proposed to make this curricular initiative infused with peace education as a model for all courses not only at MSU but in all tertiary institutions in Mindanao. They lauded the project for its support to the history faculty who have benefited from the capacity building effort of the project as it encourages peacemaking among the student beneficiaries.  Additionally, they expressed unanimous support for sustaining development of skills and tools in peacebuilding and evaluation (e.g., Focus Group Discussion) in aid of effective pedagogy. The teachers requested that a workshop dedicated to FGD methodology be conducted during this year.

Four Mindanao speakers shared their expertise in this event, which we did not have in our June 2013 workshop. They included Fr. Eliseo Mercado, past president of Notre Dame University, an ardent peace advocate who was a frequent lecturer in fora sponsored by the US Institute of Peace in Washington, D.C.  He gave an update of the recently concluded peace talks between the government and the Moro Islamic Liberation.  Another powerful speaker is Dr. Grace Rebollos, former president of Western Mindanao State University and civic leader in community peacebuilding. She also gave an excellent lecture on the ground realities in peace negotiations during the 2013 Zamboanga City caper that resulted in tremendous loss of lives and property during the 3-week siege initiated by the Moro National Liberation Front.  The third speaker is Dr. Datumanong Sarangani,  Professor Emeritus at MSU.  He helped guide the participants about history curriculum making as part of the university mandate, and in synch with the recently concluded peace talks (March 27, 2014) in Mindanao between the Moro Islamic Liberation Front and the government.  Finally, Prof Raymond Llorca, another Professor Emeritus from MSU, presented his commentary on the History manual and called attention to some social issues for future consideration. He noted, for example, the fact that the Lumads are fast disappearing (if they have not disappeared yet).   They constitute an interesting topic in history as well as anthropology (ethnography).

In that workshop, the Project Investigator also made a report on the status of the USIP project and presented some statistical data on the gains of the curricular program. He noted that the students significantly improved their knowledge of local history, and became aware of certain issues (e.g., discrimination, mining) related to minorities. In one campus (Iligan), for example, students have turned into peace activists. However, attitudes and values toward other ethnic groups have remained about the same.

After the workshop, the Project Investigator  stayed around for a while and worked  with the teachers to ensure the proper revision of the history manual and its possible adoption as textbook for all campuses of MSU.  He also met with the coordinators for future activities, as well as with the secretariat for the workshop proceedings and other matters.

Mindanao is creating waves nationally these days. The USIP project is catching some ripples in the hope of becoming part of the national conversation on peace and development. 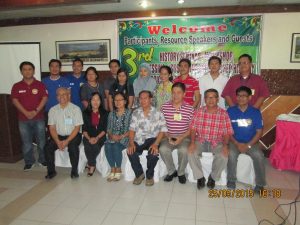 The third and last workshop on peacebuilding in the curriculum was conducted on May 24-25, 2015 at Crystal Inn, Iligan City. This is part of the two-year project under the auspices of the US Institute of Peace, which the University of Hawaii at Manoa Center for Philippines implemented in collaboration with Mindanao State University (three campuses: MSU Marawi, MSU Iligan and MSU Tawi-Tawi). The project aims to establish bridges of cultural understanding among Muslim, Christian and Lumad students at MSU, and hopefully among others in the communities where they live. In so doing, it also attempted to enhance the capacity of history teachers who are assigned to handle Hist 3 (History of Muslims and Lumads in Mindanao), which teaches students values necessary for establishing peace and minimize conflict. This course incorporated peace education concepts, including values and attitudes that promote multiculturalism and non-violence.

The two-day event highlighted the presentation of results of the project since it began in 2013, and allowed participants to evaluate its impact on the students and teachers. There were 32 teachers who attended the workshop. After two years (or four semesters), the project team presented results of the “quasi-experiment” to show what has been achieved in teaching the enriched history course in the three MSU campuses.

Overall, the results of the experiment are quite satisfactory though in the beginning there were problems. The project team is proud to have done this initiative to the finish.

On April 30, 2014 at the Mānoa Awards Ceremony in Orvis Auditorium.  Chancellor Tom Apple and campus leadership were joined by the awardees and their students, colleagues, family and friends to celebrate their accomplishments.  Two professors affiliated with the Center for Philippine Studies, Professor Aurelio S. Agcaoili of Indo-Pacific Languages and Literature and Professor Roderick Labrador of Ethnic Studies were both awarded Chancellor’s Citation for Meritorious Teaching.

Muslim Societies in Asia and the Pacific (MSAP) has just published a short feature article on the digital project undertaken by the Center for Philippine Studies, which is part of the larger eMindanao initiative. This project is an annotated bibliography on the southern Philippines now available online at the CPS website and also published at eMindanao.com for its outreach program that involves participation of institutional partners from Mindanao. It contains a collection of  1,000 articles, books, images, video clips, and other documents available online for viewing and downloading by researchers and scholars interested in the Bangsamoro (term for Muslims in the Philippines), Lumads (other indigenous people), Mindanao economy, polity, history, arts and literature, conflict and the peace process, the Sabah issue, and related topics. Most of the titles listed in the bibliography come with brief abstracts, linked to the full documents from their original sources.