The Center conducts regular “brown-bag” lectures and public seminars on topics related to the Philippines and Filipinos. It has presented more than 500 speakers to date. The lecture series is intended to promote intellectual interest and interaction within the University community, particularly among Philippine specialists. It also serves as a forum for distinguished Philippine specialists, intellectuals, officials, and other visitors who are invited to speak. Among them have been former Senators Leticia Ramos Shahani and Arturo Tolentino, former Senate President Jovito Salonga, former University of the Philippines (UP) President Jose Abueva, Dr. Doreen Fernandez, Dr. Carolina Hernandez, Dr. Mahar K. Mangahas, the late writers Salvador P. Lopez and Bienvenido Santos, famous author N. V. M. Gonzalez, noted novelist and 1980 Ramon Magsaysay awardee for Literature, Journalism, Communications F. Sionil Jose, historian Reynaldo Ileto, and Prof. Jose David Lapuz. The Center sponsored the first Asian-scholar-in-residence at UHM, Dr. Bienvenido Lumbera, UP professor of literature and Filipino, who likewise won the Magsaysay Award. It also sponsored two Distinguished Florence Macaulay Lectures, bringing to the campus Prof. Solita Monsod of the UP School of Economics and Ms. Monalisa Yuchengco of the Yuchengco Group of Companies. In Spring 2012, it hosted Resil Mojares for the Andrews Professorial Chair.

Please click on past lectures in our archives Colloquium Series, 2000-2014.

This is a presentation on Filipino soldiers during WWII based on the the archives mined from the National Archives, Washington, D.C. For details, see flyer 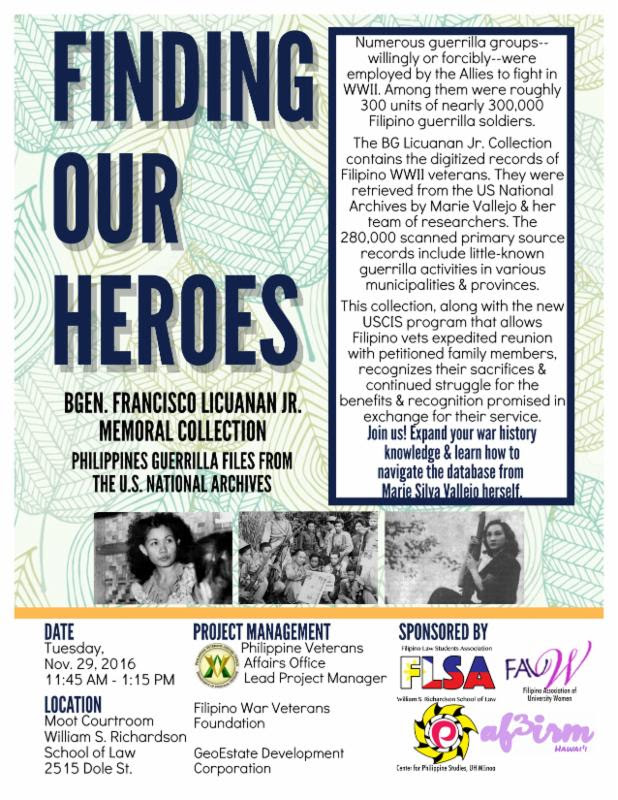 Grace Nono is a music performing artist, cultural activist, and music and shamanism scholar from Mindanao. For this once in a life-time event, Grace will sing and speak about decolonizing voice and reclaiming cultural relations. For details, please see flyer. Grace3

(Free and open to the public, but donations are welcome at the door. Please reserve your Seat , first come first served.)

Jointly sponsored by the UH Center for Philippine Studies and community partners (Decolonial Pin@y and University of the Philippines Alumni Association of Hawaii).

Please come, listen and participate in this presentation to understand more why Islamic radicalism seems to be on the rise in the southern islands of the Philippines. Details at:  Lidasan_Lecture-ISIS-Threat.

The Bangsamoro Agreement and the Status of the Peace Talks in the Philippines, by Jose David Lapuz, June 3, 2015, Wednesday, 11:00am-12:00pm, Paradise Palms Cafe. Sponsored by the Center for Philippine Studies. Free and open to the public.

Philippine Muslims have been politically marginalized and are considered economically deprived in what is their ancestral domain. Discontented, Moros formed armed separatist groups and have since waged a struggle for self-determination that continues to this day. This roundtable discussion will discuss the Framework Agreement on the Bangsamoro is an agreement between the Government of the Philippines and the Moro Islamic Liberation Front.More…

Dr. Galam’s presentation looks at how Filipino youths respond to their precarious economic conditions and uncertain future prospects. It focuses on young men who, having finished three or four years of maritime education, and in order to secure a job as a seafarer in the global maritime industry, first work as ‘utility men’ for crewing agencies that supply seafarers to ships.More…

Ms. Gaerlan is Executive Director of Bataan Legacy Historical Society which she founded to address the lack of information about the role of the Filipinos during World War II in the Philippines. On the other hand, Mr. Los Banos was enlisted in the US Army in 1944 during WWII. He served as an infantryman with the 1st Filipino Infantry Regiment comprised almost entirely of Filipino-American, and saw action in Samar in 1945. More…

Dr. Aquino will discuss how the Philippines is characterized as a country of strong women, producing two female presidents (and one “de facto president”) and has achieved significant advances in female participation in major institutions of society. Yet, the Phillippines, which is the 12th largest country in the world, remains poor by modern standards. And the vast majority of Filipino women still live on the edge of economic survival. The “feminization of poverty” is easily discernible in the continuous mass exodus of Filipinas every year to overseas destinations in search of better opportunities and economic security. More…

The Filipino Association of University Women is undertaking a project that would explore how Filipino women immigrants transmit Filipino culture, and looks at what is actually being transmitted. They are inviting women to share their (1) lived experiences of Filipino culture, (2) core values as passed on by their ancestors, and (3) their own culture transmission and culture perpetuation behaviors. FAUW plans to document the stories and conduct outreach presentations to share their findings. More…

Newly-arrived Philippine Consul General to Honolulu, Gina A. Jamoralin will speak at the University of Hawaii on the challenges and opportunities of, as well as her visions for a stronger, enduring and forward-looking Philippines-US relations. The Consul General will discuss the recent milestones and the recent signing of the Enhanced Defense Cooperation Agreement. More…

Prof. Dalisay will discuss the implications of internalized colonialism for social scientific research on Filipinos and Chamorros. He will explain Filipino psychologist E.J.R. David’s concept of the colonial mentality of Filipino Americans, focusing particularly on colonial debt as a sub-component. Prof. Dalisay will then present the results of a representative survey conducted with a sample of Filipinos and Chamorros living in Guam. More…

Prof. Desierto discusses the November 2013 decision of the Philippine Supreme Court in Belgica et al. v. Executive Secretary et al., which dismantled most of the Executive Branch’s pork barrel distributions to Members of Congress, largely distributed throrugh the Priority Development Assistance (PDAF). The lecture also discusses developments from the ongoing oral arguments at the Court involving petitions challenging the constitutionality of the remainder of the pork barrel system administered under the Office of the President’s Disbursement Acceleration Program (DAP). More…

A detailed account of Prof. Desierto’s lecture is provided by Alden Alayvilla Here.

This presentation gives preliminary commentary on upcoming future research, highlighting turns in orientations toward the Philippine homeland from the 1970s until today and considering larger reverberations in the production of Filipino American diasporic subjectivities. Mariano argues that transnational calls for communal efforts toward the betterment of the Philippines has shifted from anti-Marcos politics and organizing to philanthropic and social development efforts. It contextualizes some of Mariano’s research questions on the implications of this homeland re-orientation. More…

Dr. Okamura will talk on “Filipino American Access to Public Higher Education in California and Hawaii.” In 1998, Filipino American students joined African American and Latino students in a class – action lawsuit that charged the admissions policies of the University of California, Berkeley violated federal antidiscrimination laws. Two years earlier, California voters passed Proposition 209 that prohibits race – based affirmative action in college admissions. In 1996, the University of Hawai’i Board of Regents approved a 50 percent tuition hike and another 23 percent increase for the following year. Okamura’s presentation compares the impact of those policies on the admissions and enrollment of Filipino American undergraduates in the UC system and the UH Manoa since 1996.

On the other hand, Dr. Halagao will speak on the “Status of K-12 Filipino Education.” Her research focuses on Filipinos and education in Hawaii. She has developed numerous Filipino curriculum and professional development programs such as Pinoy Teach, iJeepney.com sponsored by the Smithsonian, the Filipino American Education Institute, and the F.O.B. Project. She is recipient of the Board of Regents Teaching Excellence Award (2012) and recently appointed to serve on the Hawaii Board of Education. More …

The trio are all professors from Mindanao State University. Dr. Ulindang will speak on “Migrants of Mindanao: Perils, Debacle and Recovery,” where she explores into the lives of second generation Mindanaoan settlers, particularly those whose parents were supported by government resettlement projects during the Commonwealth and Magsaysay administrations in the Cotabato provinces and Kapatagan, Lanao del Sur. Sporadic interviews also from the migrants themselves as well as written both primary and secondary sources are the main bases for this study.

Dr. Anonas talks about “Electoral Issues from the Perspective of Public Schools Teachers during the 2004 and 2007 Elections in Lanao.” He says that “Prior to the automation of Philippine elections in 2010, most, if not all, of the elections held were allegedly rigged to favor a candidate or a group of candidates. Allegations of electoral violations moved to high gear in the 2004 presidential election especially in Muslim Mindanao with the ‘Hello Garci’ scandal which almost cost Gloria Macapagal Arroyo her presidency. The same allegations of electoral rigging occurred in the 2007 mid-term elections for senators, congressmen and local elective officials, particularly in Lanao del Sur which is dubbed as the ‘cheating capital’ in the Philippines.”

Dr. Kamlian cites some experiences in his “Religious Discrimination in the Southern Philippines: Implications to the Peace Process” and digs into the nature, characteristic and probable causes of religious discrimination, particularly against Muslims. Author argues that this social malady is particularly driven by differences in customs, belief and history between Muslims and Christians. This presentation will also attempt to suggest some policy recommendations in order to minimize, if not eradicate, the said social problem. More…

The talk argues that with the reintroduction of mother tongue-based mother language education in the Philippines in 2009, and with the upsurge of pilot schools all over the Philippines offering the MTB-MLE curriculum, there is no other more poignant evidence that proves the irrationality of holding on to a hegemonic national language in a multilingual and multicultural country like the Philippines than this new educational initiative of that country. It argues as well that the national language as being foisted by ‘nationalists’ is a conspiracy of people who misinterpret the meaning of multiplicity, diversity, linguistic pluralism, emancipatory education, and cultural democracy in action. More…

The colloquium features Antonio A. Oposa, Jr., one of Asia’s leading voices in the global arena of environmental law. In Minors Oposa v. Factoran (1993), the Philippine Supreme Court gave standing to the petitioners-children to take legal action on their behalf and on behalf of generations yet unborn, enforcing the principle of inter-generational responsibility. More…

Language choice has become a common phenomenon in mixed marriages in which speakers face with the challenge of choosing an appropriate language in various domains of communication. In multilingual and multiracial societies, language choice can sometimes be crucial because of its social, political, and economic impact on the speakers. Even in the smallest unit of a society which is the family, language choice and accommodation strategy play an important role particularly in interactions of couples who come from different linguistic and cultural backgrounds. More…

This presentation is based on the fieldwork I conducted in the Philippines concerning the practice of Rondalla in the Ilocos Sur region. In the municipality of Santa Lucia, Ilocos Sur, the Ilokano identity is conflated with the national practice of the rondalla through their construction of a localized tuning system. This localized tuning system allows them to use fingering positions that transition freely between instruments. While this practice is useful for regional musical styles, I argue that this local tuning system excludes the Santa Lucia ensemble from national rondalla practice and handicaps local students aspiring to further their musical studies and perform in rondalla ensembles outside their region. More…

Long ago, in the magnificent mountains of Barlig, Mountain Province, Philippines, the Ifiallig would sit around the fires of the ator (council-house) to listen to tales of their hero-ancestors. Venerable storytellers (umu-ufok) recount these stories in the Finallig language. These stories (ub-ufok), handed down for many generations, serve as a record of their history, genealogy and cultural traditions. Ifiallig society used to revolve around the stories told within the walls of the ator. The death of influential village elders, with no one to take their place, will inevitably extinguish Barlig’s orature, and along with this will vanish the beautiful stories that have given honor and value to the life of a people. More…