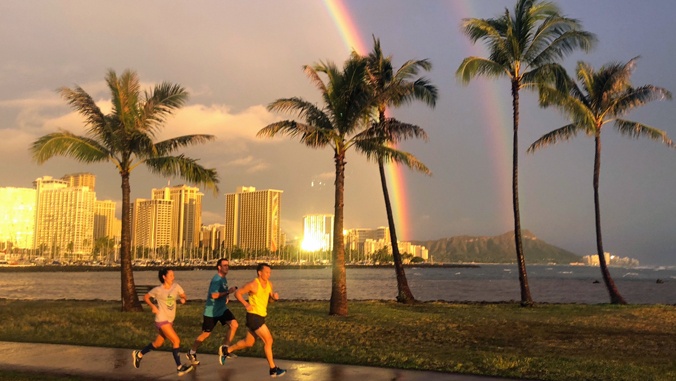 The first study to characterize the frequency of several atmospheric disturbance types in Hawaiʻi and the magnitude of rainfall associated with them aims to help inform future water management decisions in the state.

The study by researchers from the University of Hawaiʻi, East-West Center and the University of Albany was recently published in American Meteorological Society’s Monthly Weather Review. The team analyzed 20 years of storm data for Hawaiʻi to help scientists and policy makers better understand how rainfall is impacted by specific weather events. The main objective was to determine how each of four types of atmospheric disturbances contribute to rainfall at different times of the year in Hawaiʻi.

The research team, led by East-West Center research fellow Ryan Longman, built time series data that categorized cold fronts, Kona lows (storms that form in the mid-latitudes and move southeast toward Hawaiʻi), upper-tropospheric disturbances (upper-level lows) and tropical cyclones that occurred between October 1990 and September 2010. The researchers aligned this data with that of the average daily rainfall for the entire island of Oʻahu to gain insights on how weather events drive rainfall.

“As global climate change increasingly affects our weather locally, it is important for us to better understand the role of different kinds of weather disturbances in producing rainfall on the island,” said co-author Thomas Giambelluca, a UH Mānoa geography professor and director of the Water Resources Research Center. “These research results provide a guide to assessing how future changes in the number of cold fronts, Kona storms, and other disturbances will change the amount of rainfall we get.”

Researchers found that rainfall driven by weather events can account for as much as 48% of total rainfall in a single season and bring much needed precipitation to dry-leeward areas of Oʻahu. In addition, they found that cold fronts are the most common type of weather event (avg. 14 per-year) and fronts that pass over the island contribute significantly to our annual totals. However, fronts that approach but do not cross the island actually result in less rainfall for the entire island of Oʻahu than on days with no disturbances.

“If storm tracks are to shift poleward due to climate change, then we may see fewer cold fronts pass over the islands. As a result, leeward areas that are dependent on disturbance driven rainfall could potentially become even drier in the future,” said Longman.

This research was initially funded by the Honolulu Board of Water Supply, with additional support coming from the U.S. Army Corps of Engineers, the National Science Foundation Hawaiʻi Established Program to Stimulate Competitive Research (EPSCoR) ʻIke Wai project and Pacific Islands Climate Adaptation Science Center over more than five years.

Future research for Longman and team includes the creation of new high-resolution daily rainfall maps that will be updated in near-real time. This will provide additional opportunities for researchers to better understand the nature of disturbance driven rainfall and for resource managers to make important water management decisions in near-real time.

Use of this site implies consent with our Usage Policy. The University of Hawaiʻi is an Equal Opportunity/Affirmative Action Institution