Tony Castanha grew up in Hawaiʻi, eating Chinese food and aware of his mixed blood, which also includes Portuguese and English ancestors. He studied in Seattle, lived in Europe and taught in Japan.

Long active in the Hawaiian movement, he wrote his University of Hawaiʻi master’s thesis on the effects of Hawaiian sovereignty on the non-native population.

But it is the Jíbaro blood of the Puerto Rican immigrants on his mother’s side of the family that called to him. Aware of his cultural identity and prompted by curiosity about that island’s experience with colonialism, the University of Hawaiʻi at Mānoa ethnic studies instructor turned his eyes to the Caribbean.

The Jíbaro, or Boricua, are the indigenous peoples, the “Indians,” encountered by Columbus on Borikén, the native name for Puerto Rico. Subjected to colonialism, they were considered virtually extinct as a people by the mid-16th century, and the refrain has been made over and over.

Castanha refutes that notion in his new book, The Myth of Indigenous Caribbean Extinction: Continuity and Reclamation in Borikén (Puerto Rico). “Whole communities of Jíbaro people survive today,” he said. 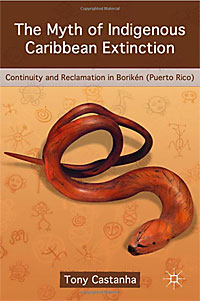 The book, which draws on his research as a UH Mānoa doctoral student in political science, documents five centuries of remarkable resistance and cultural continuity.

“I look at the cultural continuity of people in Puerto Rico,” he said. People practice old traditions in agriculture—such as planting by the moon, mixing different plants and planting in mounds—as well as spiritual practices and use of medicinal plants. Indian words persist in the names of places, foods and plants, and Indian accents prevail in many Spanish words spoken.

“I’ve made many trips to Puerto Rico. I feel a strong cultural connection—I’m mesmerized,” he said. “I don’t deny my other backgrounds, they just don’t touch me like my Native American background.”

In Puerto Rico, as in Hawaiʻi, there is a resurgence of native culture, he observed. The indigenous Jíbaro provide the root culture in Borikén.

The colonial experience of Puerto Rico and Hawaiʻi isn’t just an academic comparison. After the great San Ciriaco hurricane and famine, more than 5,000 Jíbaro were brought to Hawaiʻi as laborers for the sugar plantations via 11 voyages at the turn of the 20th century—after the Portuguese, Japanese and Okinawans and before the Koreans and Filipinos.

Most of those who survived the trip across the North American continent and Pacific Ocean stayed. The community, much closer in the 1930s and 1940s, has largely dispersed now, although the oldest and largest cultural association, the United Puerto Rican Association of Hawaiʻi, still exists and large populations remain in areas on Maui and the Big Island.

“A lot has been lost in terms of knowledge about the homeland,” Castanha said, but the culture persists in dances with Jíbaro music, foods that people cook and the mannerisms of the people.

He hopes his book will serve as an educational tool in understanding the past 500 years. He plans to have it translated into Spanish.

“I believe it’s an important subject, partially because Puerto Rico is still a colonial possession of the United States. This is not a kind of ‘revisionist’ history I’m telling. Lives are still at stake.”