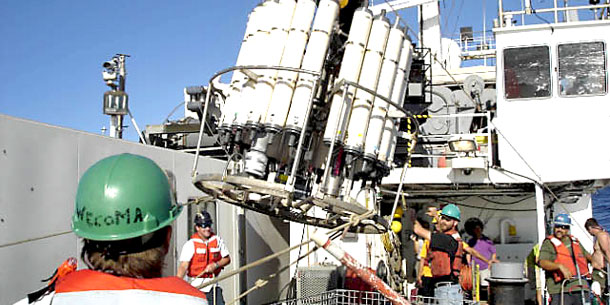 An international team of scientists led by University of Hawaiʻi at Mānoa oceanographer David Karl has documented a regular, significant and unexpected increase in the amount of particulate matter exported to the deep sea in the North Pacific Subtropical Gyre.

They suspect the previously undocumented phenomenon may be a response to day length, a general phenomenon known as photoperiodism.

Half of the photosynthesis on Earth is attributable to microscopic, single-celled phytoplankton that inhabit the sea. The vast majority of photosynthetic carbon fixation takes place in low-biomass, low-nutrient open ocean gyres, with about 15 percent of particulate organic matter settling into deep-sea reservoirs to await eventual resurfacing.

The researchers suspect that the unanticipated summer jump in deep-sea sequestration of carbon is due to seasonal increases in the biomass and productivity of symbiotic nitrogen-fixing cyanobacteria in association with diatoms.

This increase in microbial presence and activity is distinct from surface blooms, which don’t necessarily result in transfer of particulate matter, but does have ecological implications, said Karl. Besides identifying the probable mechanism and documenting seasonal variability and efficiency in carbon sequestration, the findings confirm the importance of nitrogen fixation and diatom-cyanobacteria symbiosis in the efficient transfer of carbon and energy to the deep sea.

In the absence of any obvious predictable stimulus or habitat condition, the scientists hypothesize that changes in day length may be an important environmental cue to initiate aggregation and subsequent export of organic matter to the deep sea. Nearly all cyanobacteria and eukaryotic algae studied to date, including marine diatoms, have light-activated molecular switches, they note.

Their conceptual model provides a testable hypothesis for future laboratory and field experimentation.

It’s not the first time that Karl has been out front with unexpected findings that spur new science. A three-page profile that accompanies the PNAS article describes the origin and high points of a remarkable oceanographic career.

A baseball-playing, motorcycle-riding youth who served as high school class president and aspired to become a commercial fisherman, Karl was captivated by the sea from his first glimpse of the ocean, viewed from atop a Maine mountain when he was 17.

As a master’s student at Florida State University, he helped improve the assay used to quantify ocean microbes and applied it to marine sediments—the first of many tools and processes he had a hand in developing.

A newly minted PhD just hired by the University of Hawaiʻi, he set off on his first National Science Foundation–funded grant to study newly discovered life forms at hydrothermal vents on the Galapagos Rift. In 1999, he published the first account of microorganisms in another extreme environment, the accreted ice of Antarctica’s Lake Vostok.

Karl conceived of the Hawaiʻi Ocean Time-series program, launched by the National Science Foundation with a $1 million grant in 1988 and is still collecting crucial microbial and biogeochemical data such as that providing the basis for the current paper. (UH Mānoa colleague Roger Lukas leads the companion physical oceanography portion of HOT.)

Along the way, Karl has garnered numerous professional awards and been elected to the National Academy of Sciences. He has published hundreds of papers and helped secure more than $62 million in extramural funds. His proposal of “Southern Ocean” as the name for waters south of the 60° south latitude was formally designated by the U.S. Geographical Board of Names, and he is credited with helping create the discipline of microbial oceanography.

As director of the new Center for Microbial Oceanography: Research and Education, a National Science Foundation–sponsored Science and Technology Center with five partner institutions, he continues to advance the understanding of the life of the sea “from genome to biome.”

Reflecting on his first Galapagos Rift dives, Karl says the mesmerizing deep-sea hydrothermal vents “revealed how little we actually knew about our planet.”

With unflagging enthusiasm, he continues to do his best to change that.

The research was supported by grants from the National Science Foundation and the Gordon and Betty Moore Foundation.

Read an extract of the PNAS profile of Karl.

Center for Microbial Oceanography: Research and EducationoceanographySchool of Ocean and Earth Science and TechnologyUH Manoa