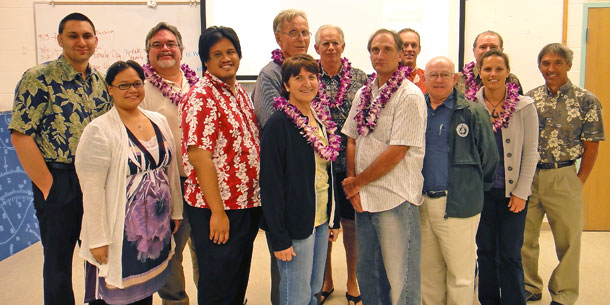 If he had known what a complex undertaking it would be, Nainoa Thompson says now, he might not have asked Honolulu Community College to create a digital library of documents related to the Polynesian Voyaging Society.

But the man whose name is synonymous with rescuing traditional voyaging from the brink of extinction celebrated the public launch February 8 of hookele.org, a digital archive created through a partnership of the Polynesian Voyaging Society, Honolulu Community College and the Hawaiian Digital Library Ulukau.

“The stuff you folks have done is on the level of a miracle,” Thompson told the project staff and a supporting crew of contributors.

It took six years and review and research and the digitizing and organizing of 65,000 documents to create the extensive record of the society and the voyages of Hōkūleʻa. The project began with the society’s archive at Kamehameha Schools, where materials were preserved but not readily available for scholarly or public use, Thompson said. The effort expanded to include additional materials from crew members and sources.

“Voyaging by the ancient Polynesians was one of the most remarkable navigation feats in the world and we don’t know anything about it,” Thompson said. “This archive is a place to maintain the kuleana so we do not forget again.”

Honolulu Community College Chancellor Michael Rota also recognized the work of important, if more recent, predecessors. State leadership 30- to 40-years ago resulted in legislation that set aside funds for Hawaiian-serving institutions that support Hawaiian language, culture and education, he said. It was former Chancellor Ramsey Pedersen who agreed to use those federal Title III funds to support the project.

“The unique assets of our Marine Education and Training Center and the unique undertaking of the Polynesian Voyaging Society have been major benefits to Honolulu Community College and to our place in the community,” Rota said.

“What we’re sharing is one of the most significant cultural events in Hawaiian history in the last 100 years,” he added, touching on the importance placed on the Hawaiian cultural resurgence by his colleagues in the Pacific.

The Polynesian Voyaging Society came to the college’s marine center as a place to tie up Hōkūleʻa, Thompson observed. But the partnership between the institutions since 2003 has created opportunities. “There are educational programs we could create together that we couldn’t create apart.”

Training for the society’s World Wide Voyage started at the center, he added. The research to support a sailing plan that addressed weather systems around the globe, safety issues such as piracy and political unrest and accompanying educational programs took place within the center’s walls.

Traditional knowledge has to be coupled with technology, he said, describing solar powered engines that will be installed on the canoe that will be the new child of Hōkūleʻa.

“The other canoe we launch today”—a website that will carry thousands, perhaps millions of people on voyages. “It is an enormous service to those who have gone before us and those generations not yet born who want to grow up believing their homeland is a place to believe in and a place that is sacred.”

A boon to academics, educators and students alike, the site allows users to search by year, individual, voyage, document title or topic.

Project coordinator Jonathan Wong calls it “one of the coolest things I ever did.”

Support Honolulu Community College through the University of Hawaiʻi Foundation or the Polynesian Voyaging Society.