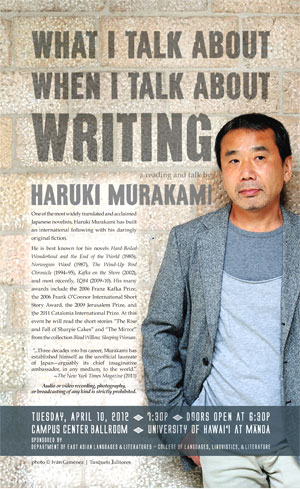 Japanese novelist Haruki Murakami will give a free public reading and talk, What I Talk About When I Talk About Writing, on Tuesday, April 10, 7:30 p.m. at the University of Hawaiʻi at Mānoa Campus Center Ballroom. Doors open at 6:30 p.m., and seating will be on a first–come, first–served basis.

Murakami, who has gained an international following with his daringly original fiction, will read the short stories “The Rise and Fall of Sharpie Cakes” and “The Mirror” from the collection Blind Willow, Sleeping Woman.

According to a recent cover story in The New York Times Magazine, “Three decades into his career, Murakami has established himself as the unofficial laureate of Japan—arguably its chief imaginative ambassador, in any medium, to the world.”

Please note that audio or video recording, photography, or broadcasting of any kind is strictly prohibited at this event.