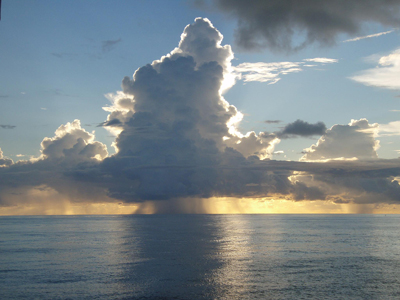 A breakthrough in Indo-Pacific climate predictions is now reported in a study spearheaded by Hiroki Tokinaga, associate researcher at the International Pacific Research Center at the University of Hawaiʻi at Mānoa, and published in the November 15, 2012 issue of Nature.

Tokinaga’s study covers the tropical Indo-Pacific climate’s global impact as seen in the floods and droughts spawned by the El Niño-Southern Oscillation. Meteorological observations over the last 60 years show this atmospheric circulation has slowed—the trade winds have weakened and rainfall has shifted eastward toward the central Pacific.

Tokinaga, along with other meteorologists have been frustrated by this anomaly for years. They could not reproduce it in their atmospheric models, questioning the ability of climate models to simulate gradual climate change.

At the root of the models’ failure, Tokinaga proposed, was the lack of precise sea surface temperature data used to drive the models. Slight differences in this temperature across the tropical Indo-Pacific Ocean can greatly affect wind and rainfall.

Tokinaga, who is an expert in understanding old, archived data sets, studied temperature data taken by ships and at correcting their biases, found two measures that have been consistent throughout the data—the bucket technique, in which the temperature is taken of sea water scooped up in a bucket lowered from a ship, and night time marine air temperature.

“Removing observational biases from the measurements was still challenging, but we saw that these quite different ways of measuring sea surface temperature turned out to agree very well over the 60-year span from 1950–2009, and were supported by subsurface ocean temperature observations,” explained Tokinaga. “To our surprise both measures showed that the surface temperature across the Indo-Pacific did not rise evenly with global warming, but that the east-west temperature contrast has actually decreased by 0.3-0.4°C, similar to what happens during an El Niño.”

Using this unbiased, reconstructed surface temperature data set in four widely used atmospheric models, the scientists were able to reproduce quite closely the observed patterns of climate change seen over the 60-year period in the tropical Indo-Pacific and the slowdown of the Walker circulation.

“The Walker circulation affects tropical convection, and the global impacts of a temporary slowdown during an El Niño are well known, resulting in extreme floods or droughts in North America and other regions of the world. How the gradual slowdown observed in this study impacts global climate still needs to be investigated.”