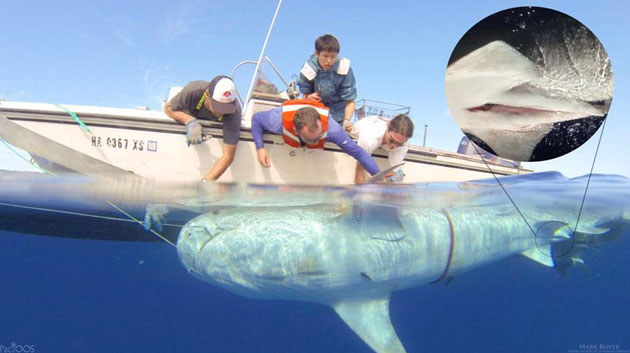 Lead scientists Carl Meyer and Kim Holland report that in early 2014, their team caught and released nine tiger sharks in waters off Maui. Six of these sharks were equipped with satellite transmitters to track their movements—five off the north coast, and one off Olowalu (West Maui). The near-real-time tracks of these sharks will be added to the eight tracks already on the Pacific Islands Ocean Observing System (PacIOOS) Hawaiʻi Tiger Shark Tracking webpage.

All of the six new tags are reporting back via satellite, but so far only two have provided messages clean enough to glean location fixes. This may be due to weather (rough seas mean less dry time for the tag, even when the shark is swimming at the surface), shark behavior (sharks may be swimming at the surface less often), limited satellite coverage, or a combination of these factors. To help scientists keep track of tiger shark movements when satellite tags are not providing many fixes, all sharks are also implanted with acoustic tags that transmit to underwater receivers deployed on the sea floor at sites of interest around Maui.

The most recent tagging trip off Maui was timed to coincide with the tiger shark mating season, a time of year when large males are easier to catch. All six sharks tagged in January bore fresh mating scars. As part of the study, researchers hope to determine whether major biological events such as pupping and mating draw tiger sharks to Maui, and whether those sharks leave afterwards.

“We are also planning additional satellite tagging for the island of Oʻahu and intend to make these data available to the public in near-real-time via the PacIOOS website,” said Meyer. “The Oʻahu data will provide a concurrent record for comparison with sharks tagged around Maui.”

Read the news release or a story on the first phase of tracing “Research team tags tiger sharks off Maui” for more information.