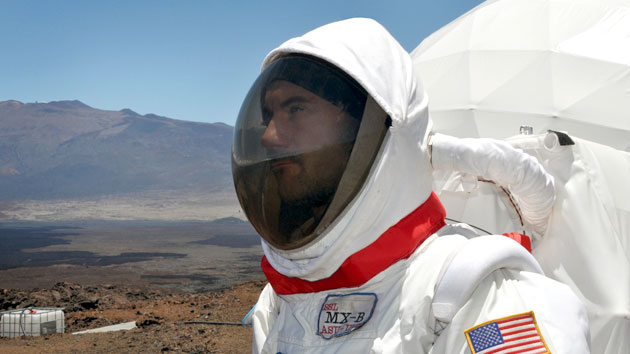 The University of Hawaiʻi at Mānoa has announced the crew for the second mission of the Hawaiʻi Space Exploration Analog and Simulation (HI-SEAS) program. The next extended simulation of Mars exploration here on Earth begins March 28.

“The upcoming mission is focused on the social, interpersonal, and cognitive factors that affect team performance over time,” said Kim Binsted, associate professor at UH Mānoa and principal investigator for the next three HI-SEAS missions planned for 2014 and 2015. “Hawaiʻi provides a unique setting to simulate the challenging conditions for human exploration to Mars. We have selected a strong crew for our next four-month study.”

HI-SEAS crew members were required to have “astronaut-like characteristics,” including the ability to pass a class 2 flight physical examination and undergraduate training as a scientist or engineer. The youngest crew member is 26; the oldest is 60 years old. Like the astronaut mission specialists they represent, each participant is expected to bring a significant research project or other scholarly work of his or her own to complete while inside the space analog habitat.

The six crew members and the reserve (alternate) member are:

During the upcoming study, researchers from outside of the HI-SEAS habitat will monitor the six crew members isolated inside the solar-powered dome at a remote site at 8,000 feet elevation on the slopes of Mauna Loa. The researchers will evaluate the crew’s communications strategies, crew workload and job-sharing, and conflict resolution/conflict management approaches to determine the most important factors for the success of a long-duration space mission.

This mission follows on the heels of a successful 2013 Mars food study, which simulated the experience of astronauts on a real planetary mission and compared two types of food systems: crew-cooked vs. pre-prepared.