For decades now, the University of Hawaiʻi at Mānoa has been at the forefront of microbial oceanography—the study of microscopic organisms, or microorganisms, in the sea.

Because of the cutting edge research done at the university’s School of Ocean and Earth Science and Technology and C-MORE, the Center for Microbial Oceanography: Research and Education, UH Mānoa was awarded the largest one-time donation the University of Hawaiʻi has ever received, $40 million from the Simons Foundation.

“The foundations don’t take lightly where they put their money,” said C-MORE Co-Director Edward DeLong. “They consider it an investment of hard earned funds and they want to see it make a difference. This is really a vote of confidence in the University of Hawaiʻi.”

The Simons Collaboration on Ocean Processes and Ecology, or SCOPE, aims to further humankind’s understanding of all ocean microorganisms. 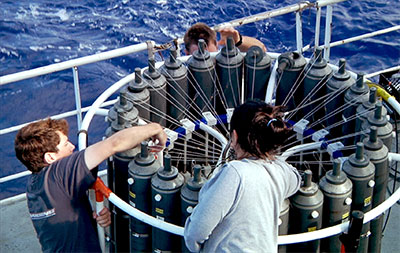 “Microorganisms are the most important living beings on this planet,” said C-MORE Director David Karl. “They’re mostly invisible to the naked eye, but they’re responsible for the habitability of this planet.”

Microorganisms in the sea produce the oxygen we breathe and break down man-made pollutants, along with being the base of the food web for the world’s fisheries.

“This new program will really allow us to get into the details, the scientific details of how organisms in the ocean make their living, how they absorb and transform energy, how they cycle elements such as carbon, nitrogen and phosphorous,” said Karl. “These are the basics of life.”

The research took a big leap forward in 1988 with the start of the Hawaiʻi Ocean Time Series program; a one-of-a-kind, ongoing, on-site study of a six-mile section of the Pacific Ocean, a hundred kilometers north of the state.

“It is a 25-year, every month, detailed, survey of how that ecosystem works,” said DeLong. “It’s probably the best-understood piece of the ocean on the planet. And I think that is one reason that we were so successful because of the foundation that got laid here at the University of Hawaiʻi.”

“Now we want to build upon that information with new measurements of genomics, metabolism and molecular biology to really understand the blueprint of life in the open ocean setting,” said Karl.

“The freedom we get is to think big and take risks,” said DeLong.

SCOPE is also a collaboration with the Massachusetts Institute of Technology; University of California, Santa Cruz; the University of Washington and the Woods Hole Oceanographic Institution.

“No individual alone, or laboratory alone, can think of doing some of these things to get to the bigger picture, and to get to that bigger picture, we need to have these symbiosis, these collaborations and that’s what part of this bigger project is about,” said DeLong.

The project offers amazing opportunities for current and prospective UH students. And it’s all the result of UHʻs long running commitment to being a top tier research university.

“We are now benefiting from this 50-year investment that has been made by the state and by the university administration,” said Karl. “Today we begin a whole new phase of research here at the university. One that will continue some of the developments that we made at C-MORE and the Hawaiʻi Ocean Time Series program but will be fundamental different in many regards, new opportunities, new research directions, and we hope new discovery.”

UH President David Lassner said that this is an incredible launch of the Hawaiʻi Innovation Initiative (HI2). DeLong is the first scientist to be hired by the university under HI2.

“A lot of people have wondered can we really be serious about building a billion dollar research industry in the state,” said Lassner. “I think this is an example of how we’ll do it. It isn’t just going to the federal government and cranking in more proposals. It’s captivating the interests of philanthropists and partners around the country and around the world to begin to build this investment in a research and innovation economy for Hawaiʻi that advances the frontiers of human knowledge.”