Death Zones and Darling Spies: Seven Years of Vietnam War Reporting by Beverly Deepe Keever was announced as the winning selection for the 2015 One Book One Nebraska reading program. The book will be read by Nebraskans across the state in an effort to promote a culture of reading and discussion.

“Death Zones and Darling Spies was the committee’s choice based on Keever’s compelling prose and ability to analyze complex historical/political contexts to provide insight into America’s military and financial involvement in Vietnam,” said Rebecca Faber, chair of the One Book One Nebraska selection committee. “Her Nebraska background provided a tie to the response of Americans at home who were trying to comprehend a war like no other in which the United States had been involved” 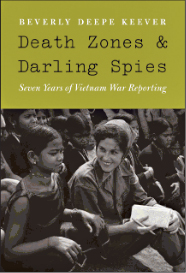 Death Zones and Darling Spies, the memoirs of American Vietnam War correspondent and University of Hawaiʻi at Mānoa Professor Emerita Beverly Deepe Keever, has been selected as a finalist for the One Book One Nebraska reading program. One Book One Nebraska highlights books written by Nebraskan authors or have a Nebraska theme or setting. A native of Nebraska, Keever’s memoir is one of four nonfiction books and three novels chosen for 2015.

Now in its eleventh year, One Book One Nebraska encourages Nebraskans from across the state to read and discuss the same book. A committee of the Nebraska Center for the Book will vote on the 2015 selection and will announce the winner at the Celebration of Nebraska Books on November 8.

Keever’s memoirs chronicle her experiences covering the Vietnam War, providing today’s readers with a raw glimpse of life during one of the nation’s most brutal wars. Death Zones and Darling Spies, published in 2013, received widespread praise from reviewers across the nation. Keever, a pulitzer prize-nominated journalist, is honored by the selection.

In addition to her graduate degree from Columbia University Journalism School, Keever was also awarded a master’s degree in library studies from UH Mānoa. Keever sees programs such as One Book One Nebraska and partnering librarians playing “an increasingly valued role in this turbulent information age.”