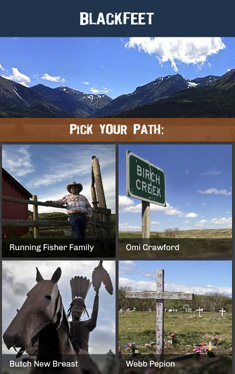 Montana suffered its worst natural disaster in June 1964 when two dams collapsed and flooded Two Medicine River, killing 29 people and destroying the homes of hundreds of others. Media coverage at the time was extensive, and earned the state its first Pulitzer Prize, to The Hungry Horse News. In retrospect, the coverage had a major hole—the people most affected by the tragedy, the Blackfeet tribal members, were difficult to reach in the aftermath and their stories were left untold for decades.

Last year, to commemorate the 50th anniversary of the flood, a research team of independent journalists and scholars from the University of Hawaiʻi at Mānoa, Washington State University and the University of Oregon joined forces and interviewed more than 20 witnesses, both survivors and rescuers. Those interviews were converted into journalistic videos and shared via a prototype mobile app during the ceremonies. Through feedback and use, this free Blackfeet ’64 Flood app has been redesigned and reprogrammed during the past six months for a broader public audience and was released through both the Apple and Android markets.

The app development and distribution portion of the project was led by Brett Oppegaard, an assistant professor at UH Mānoa in the School of Communications. He studies mobile technologies and ubiquitous computing.

“The stories of the Blackfeet were lost to time, and in danger of disappearing altogether,” said Oppegaard. “Our team’s first priority was to document these stories and tell the bigger narrative of the ’64 flood more fully, through the perspectives of the people who actually lost their lives, family members and homes. My hope for the mobile portion of this project was to also reopen the discussion of the flood for contemporary participation. I wanted this to be a story about today, too, not just a historical piece.”

Users of the app can watch the flood-related videos—created by award-winning journalists and filmmakers—and witness the disaster’s effects on the Blackfeet population. In addition, they can also directly comment on those videos in many media forms, including text, audio and video, and share those thoughts via their social media channels. Discussion prompts accompany each video in this app, and the sharing options match the social media apps on each individual’s smartphone. Both tribal and non-tribal members are encouraged to offer reflections and interpretations.

For more information, visit the ’64 Flood project website or read the UH Mānoa news release. To download the app visit Google play for Android devices or the iTunes store for Apple devices.