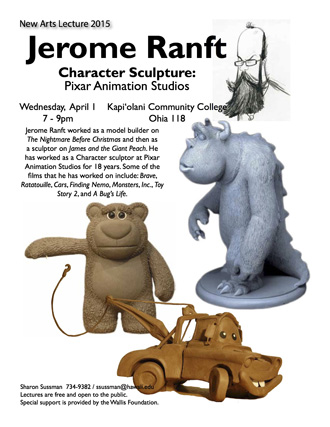 The lecture is free and open to the public due to the generous donation from the Wallis Foundation.

Ranft has been the character sculptor at Pixar Animation for 18 years. He sculpts from the character designers’ images and then collaborates with them to create the look of the characters in Pixar’s films.

He sculpted characters for award-winning animations including Brave, Ratatouille, Cars, Finding Nemo, Monsters, Inc., Toy Story 2, Up, James and the Giant Peach, Nightmare Before Christmas and many more.