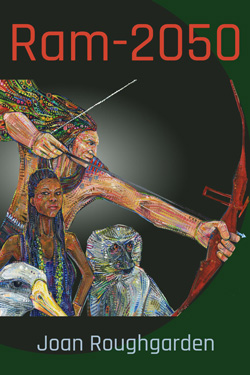 Technology joins the age-old battle between good and evil in Ram-2050, a novel written by Joan Roughgarden, a research scientist with the University of Hawaiʻi at Mānoa’s Hawaiʻi Institute of Marine Biology.

Ram-2050 retells a Hindu epic, the Ramayana, as the quest of ousted Apple CEO Ram trying to rescue his wife after she is kidnapped by an international crime syndicate. In this innovative retelling CEOs replace kings, professional geeks replace sects of priests and the hero’s superhuman capabilities are genetically engineered rather than divine.

Ram’s allies are human and animal, natural and engineered and their partnership addresses the nature of moral community in a world where genetic modification and artificial intelligence are commonplace.

Like the original sacred text, RAM-2050 is an action-packed story of the tireless pursuit of love, duty and honesty.

Roughgarden will be holding a book launch and signing on Friday, April 7, 7 p.m. at St. Michael’s Church on Kauaʻi.

Roughgarden is a widely respected evolutionary biologist from the University of Hawaiʻi and Stanford University. Her research on the nature of collaboration among animals has sparked conversation among biologists and in the media. She has published fieldwork from the eastern Caribbean islands and the rocky intertidal zone of California.

She has authored or edited eight nonfiction books, most recently Evolution’s Rainbow (2004) and The Genial Gene (2009). Ram-2050 is her first novel.