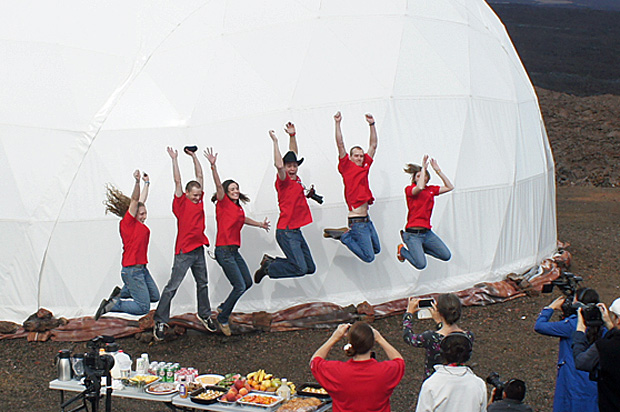 On Saturday, June 13, looking pale but smiling broadly, the six crew members of the Hawaiʻi Space Exploration Analog and Simulation (HI-SEAS) mission emerged from the dome where they have been isolated since October 2014.

The crew was still joyful and enthusiastic after enduring eight months in isolation as part of this NASA-funded space exploration simulation. It was the longest such space simulation study ever conducted on U.S. soil.

The research effort led by the University of Hawaiʻi at Mānoa is gaining insights into the human factors that contribute to astronaut crew function and performance over time—including the psychological, social and biological challenges of isolation and confinement.

Sensory deprivation is part of the game. HI-SEAS crew members recalled suiting up in full simulation spacesuits and visors whenever they went outside of the habitat dome, which is located at 8,000 feet on the slopes of Mauna Loa.

When asked what it felt like to be looking at the world without the blur of a bubble of glass, they laughed.

“It’s totally amazing,” said HI-SEAS mission commander Martha Lenio. “Sophie [Milam] and I went on an EVA (extravehicular activity, or simulated space walk) last night, and it was so clear at night. Even through the suits, we could see the stars and the Milky Way. We were like, ‘Oh my god, it’s going to be amazing tomorrow when we can get out and can actually see things again!’”

Like its predecessor missions—including a four-month study in early 2014—this mission is anticipated to expose many unexpected realities that future Mars explorers will experience once they become situated on the planet surface in a small space for a prolonged period of time.

Under the guidance of UH Mānoa principal investigator Kim Binsted, researchers are still crunching data collected during the past eight months of monitoring the HI-SEAS crew. But they’ve also begun preparing for the third and final simulation in the series: a year-long mission, scheduled to begin in August 2015. The names of the participants in the next faux astronaut crew have not been announced yet.

The HI-SEAS crew celebrated the end of its mission with a tandem parachute dive with the U.S. Army Golden Knights parachute team. 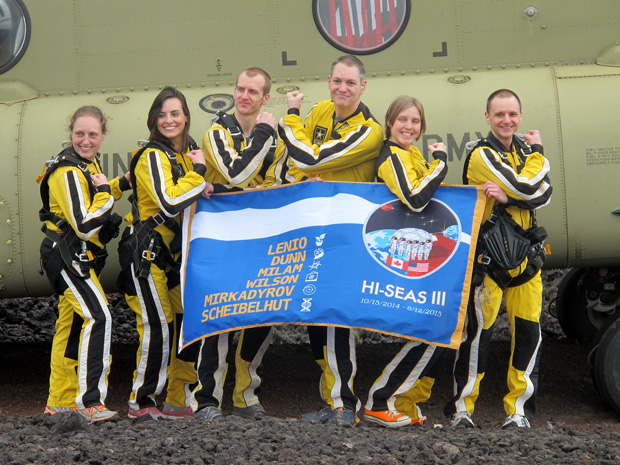