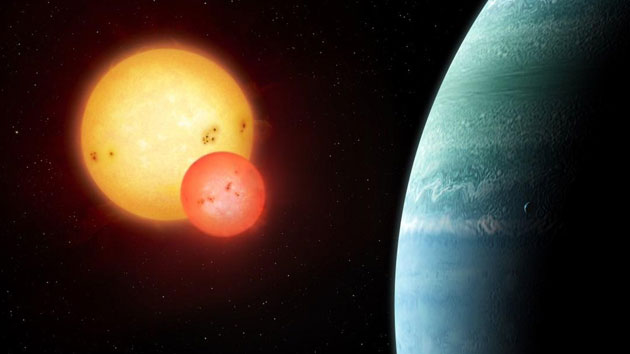 A team of astronomers at the International Astronomical Union meeting in Honolulu, including University of Hawaiʻi astronomer Nader Haghighipour, will announce on August 14 the discovery of the tenth transiting circumbinary planet.

The team is led by William Welsh, a professor at San Diego State University. The work has been published in the Astrophysical Journal, and the preprint is available.

Reminiscent of the fictional planet Tatooine in Star Wars, circumbinary planets orbit two stars and have two “suns” in their skies. The new planet, known as Kepler-453 b, takes 240 days to orbit its parent stars.

Kepler-453 b resides in the habitable zone of its host pair of stars, a surprisingly common occurrence for the circumbinary planets discovered by the Kepler Space Telescope.

Kepler-453 b moons could be habitable

Because Kepler-453 b is larger than Neptune, it cannot be habitable. However, because it is a giant gas planet, it may, like the giant gas planets in our solar system, have large moons, and those moons could be habitable. According to Haghighipour, the orbit of Kepler-453 b will remain stable for tens of millions of years, increasing the possibility of life forming on its moons.

Circumbinary planets form the same way planets form around single stars, but at greater distances from their host binaries. They then migrate to their more permanent orbits. This migration can be a result of the planets’ interaction with a disk of material around the entire binary system, or their interaction with other planets in the system.

“In the case of Kepler-453 b, we believe that both of these mechanisms could have occurred,” Haghighipour said.

Most of Kepler-453 b’s transits are not visible from Earth. “The change of orientation of the planet’s orbital plane, known as precession, brought it into proper alignment halfway through the space telescope’s lifetime, allowing three transits to be observed before the end of the mission,” explains co-author Jerome Orosz (San Diego State University). The precession period is estimated at about 103 years, so the next set of transits won’t be visible until 2066.

The stars themselves orbit each other every 27 days. The larger star is similar to the sun, and has 94 percent of the sun’s mass, while the smaller star contains only 20 percent as much mass and is far cooler and fainter, emitting less than one percent of the energy of the larger star.

The discovery comes only four years after the first transiting circumbinary, Kepler-16 b, was detected. Since then, Haghighipour said by modeling the formation and evolution of the currently known circumbinary planets, they have learned that these planets are common in our galaxy and can come in a wide range of mass, size, and orbital configurations.

The Kepler-453 system resides in the direction of the constellation Lyra and is estimated to be 1–2 billion years old, much younger than our solar system.

Funding for this work was provided in part by NASA and the National Science Foundation.

—An Institute for Astronomy news release