Inductees are chosen for their “demonstrated dedication and commitment to the growth of the restaurant and food service industry in Hawaiʻi, contributions to the enhancement of its quality and image and demonstrated service through outreach,” according to HRA.

Oyama has been a key leader in the business since graduating with a degree in culinary arts from Kapiʻolani CC. He has taught in various cities in China, including Xiʻan, Hangzhou and Shanghai and held chef positions in Alaska, Connecticut, Oʻahu and the Big Island before accepting a faculty position in the Culinary Arts Program at Kauaʻi CC in 1992.

New to Kauaʻi CC, Oyama was soon thrust into the role of managing the kitchen while the college served as a major shelter after Hurricane Iniki ravaged the island on September 11, 1992. In a month, more than 90,000 meals were prepared for those who sought refuge at the college.

During that first year, Oyama also mentored students who entered the state-wide culinary competition, Culinary Arts and Suppliers Exhibition, on Oʻahu, where they won first place and brought home the Chancellor’s Trophy. As a judge of the competition, his mentor, Kapiʻolani CC Chef Instructor Ernst Hiltbrandt, witnessed Oyama’s successful utilization of what he learned as a student in teaching his own students. Oyama has led Kauaʻi CC students to numerous gold and silver medals in other competitions. 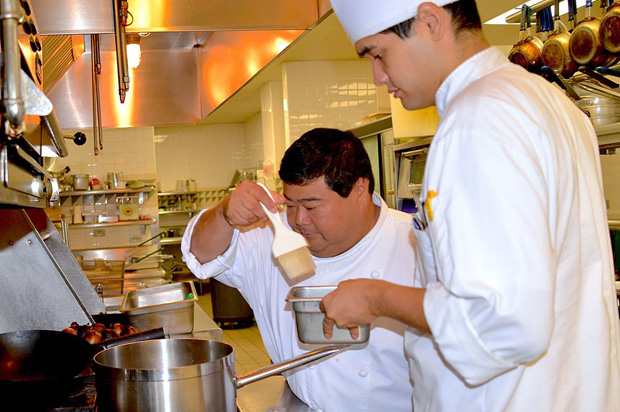 Oyama teaches students that food is connected to every emotion and life occasion, ranging from joyous to sorrowful. It must be of the highest level of quality and fit the occasion. His goal in every course is to teach the mastery of techniques, methods and flavors. “Don’t be afraid to make a mistake; cooking is a lot of trial and error,” is Oyama’s advice to all students.

Oyama is to be credited for initiating and orchestrating, for the past 13 years, the annual Kauaʻi CC Spring Gourmet Gala, a food and wine pairing event, which has become the premier, sold-out event of the year on island.