How To Win At Checkers (Every Time), co-produced by University of Hawaiʻi Academy for Creative Media System Director Chris Lee, has been submitted to the Motion Picture Academy of Arts and Sciences by the Thai government for official consideration in the Oscar Best Foreign Film category. The film, set in the suburbs of Bangkok, premiered at the Berlin International Film Festival in January. It has been well received at more than 50 film festivals around the world and has won seven best film awards.

In Thailand, all males turning 21 years old must participate in the annual military draft lottery. Drawing a black card grants exemption, while drawing red results in two years of military service. On the morning of his draft lottery, Oat reflects back on his childhood when as a child, his older brother Ek faced the possibility of being drafted himself. Unable to convince Ek to do whatever he can to change his fate, young Oat takes matters into his own hands, resulting in unexpected circumstances.

“On behalf of all the entire filmmaking team which included our all Thai cast and crew, our wonderful writer-director Josh Kim, and fellow producers and financiers from throughout Asia, we are thrilled by this official recognition by the Thai government.” said Lee. “I am particularly pleased by the role Hawaiʻi played in developing the screenplay through the Creative Lab at the Hawaiʻi International Film Festival (HIFF) and delighted that How to Win at Checkers (Every Time) will have its local premiere November 13 at this year’s HIFF.”

How To Win At Checkers (Every Time) is Korean-American filmmaker Josh Kim’s debut film. Based on the short stories “At the Café Lovely” and “Draft Day” from the U.S. bestselling book Sightseeing by Rattawut Lapcharoensap, the film is also the first project to come out of Creative Lab at Hawaiʻi International Film Festival’s Writers Accelerator. Both Kim and co-producer Edward Gunawan went through the Creative Lab program in developing the film’s script.

Lee hopes to see Academy for Creative Media graduates making personal and impactful films that speak to and challenge audiences.

“In building the Academy for Creative Media System first at UH Mānoa and now at all 10 campuses, our goal in cinematic production has always been to tell unique stories that are true to ourselves but speak to the widest possible audience,” said Lee. ”Checkers is exactly the kind of independent film—personal, emotional, honest, enlightening and compelling—that we know our students and graduates strive to accomplish.”

For more information, visit the How To Win At Checkers (Every Time) website. 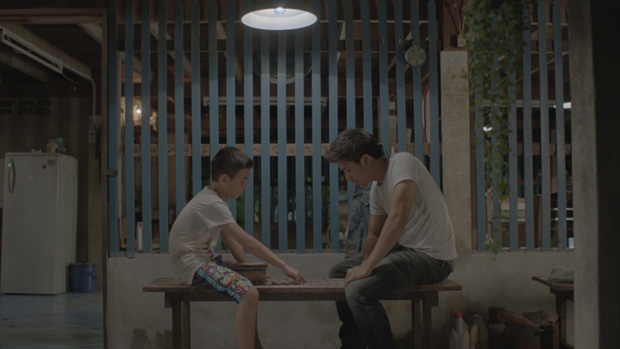