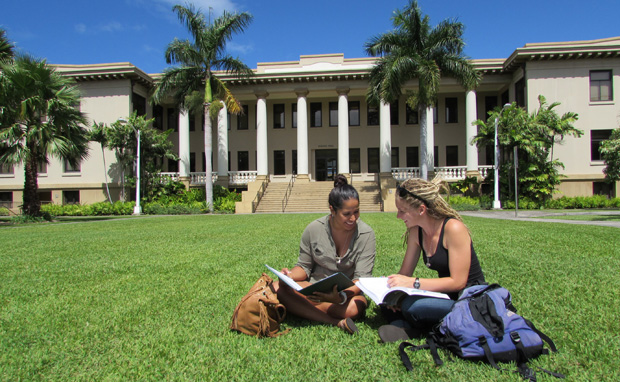 The University of Hawaiʻi at Mānoa’s standing as a nationally recognized and world-class university has once again been affirmed, after two more significant university rankings were released. UH Mānoa is consistently ranked in the top 1.5 percent of nearly 24,000 universities in the world.

The National Taiwan University ranking analyzes and ranks the scientific paper performances of universities around the world. Out of more than 4,000 research institutions considered by NTU, UH Mānoa’s 2015 ranking has improved from 203 in 2014 to 186 in the world, and from 80 in 2014 to 71 in the U.S.

Said Chancellor Robert Bley-Vroman, “As important as these international rankings are in promoting and marketing UH Mānoa in a global market and as benchmarking tools, these steady improvements in standing across all major rankings in 2015 indicate that our research and academic excellence are recognized around the world.”

In today’s era of globalization, colleges and universities are increasing efforts toward global recruitment of students and talent, as well as expanding international collaboration at the institutional and program levels. Institutions are, in turn, broadening their focus from domestic, national rankings to include various international rankings.

Yang Zhang, director of the Mānoa Institutional Research Office (MIRO), is quick to emphasize that different rankings use different methodologies and each contributes only one perspective of how universities can be ranked.

Because of UH Mānoa’s uniqueness, MIRO studies the university’s performance using a variety of rankings, rather than a single specific ranking. Considering Mānoa’s mission of advancing research to serve the public good and its need to attract students and talent globally, Zhang advises that international rankings are more useful and appropriate benchmarking tools, rather than the U.S. News and World Report’s Best Colleges ranking that usually favors private and affluential institutions, but have traditionally been more familiar to the U.S. media and general public.