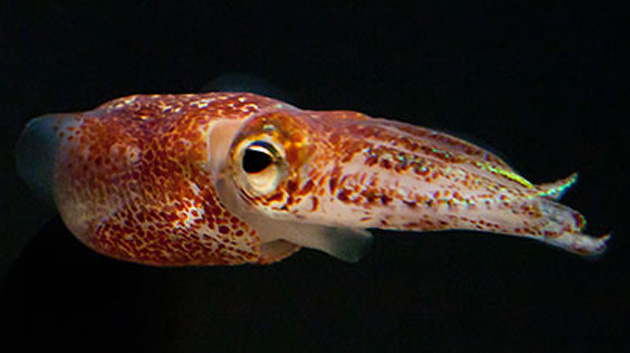 The small but charismatic Hawaiian bobtail squid is known for its predator-fooling light organ. To survive, the nocturnal cephalopod depends on a mutually beneficial relationship with the luminescent bacterium, Vibrio fischeri, which gives it the ability to mimic moonlight on the surface of the ocean, and deceive monk seals and other predators that would happily make a meal of the small creature.

A study published recently in Applied and Environmental Microbiology by Edward “Ned” Ruby, professor at the University of Hawaiʻi at Mānoa’s Pacific Biosciences Research Center and colleagues from the University of Wisconsin–Madison revealed that Vibrio fischeri has a novel type of receptors that sense the presence and concentration of fatty acids, a building block of all cell membranes. This class of receptors allows a bacterium to migrate toward short-chain fatty acids—a phenomenon referred to as chemotaxis.

“This is the first example of a receptor for this class of compounds, and this receptor appears to have evolved in, and be restricted to, the Vibrionaceae family of marine bacteria,” said Ruby.

The language of bacteria

Sending and receiving chemical signals allow bacteria to communicate with other organisms, gather information about their environment and determine with whom to create a mutually beneficial partnership— a symbiosis. For example, the Hawaiian bobtail squid hatchlings aren’t born with Vibrio fischeri. They attract it, and only it, from the surrounding seawater using chemoattractants, and capture it in their light organs.

However, the newly discovered fatty-acid sensors are not required for the bacterium to initiate symbiosis with the squid. Thus, the ability to migrate towards fatty acids appears to play a critical role in some other aspect of the bacterium’s life history.

“Interestingly, in Vibrio fischeri the gene encoding the receptor has duplicated, so that the cell has two copies of similar, and apparently functionally identical, genes. Such genetic investment in this receptor suggests that the ability to sense and migrate toward fatty acids may be important in the pathogenicity of other Vibrio species like Vibrio cholera [which causes cholera], Vibrio vulnificus [which causes necrotizing skin infections and gastroenteritis] and others,” said Ruby.

All organisms, even humans, use chemotaxis to attract beneficial microbes to specific tissues. For example, as human infants are exposed to bacteria in their environment, they must attract desirable species to particular tissues—gut, skin, teeth, reproductive tract—that must be colonized by these bacteria.

In the future, Ruby and colleagues will continue to try and discover the attractants that allow Vibrio fischeri to be the only bacterial species that can colonize the light organ of the squid. With only one species to track, it is easier to study the colonization process than when there are dozens or hundreds of bacterial species that are needed to colonize the tissue (like the gut).

Understanding how this colonization takes place will lead to greater understanding of how Earth’s many microbiomes become constructed and, thus allow us to better construct and manage them.