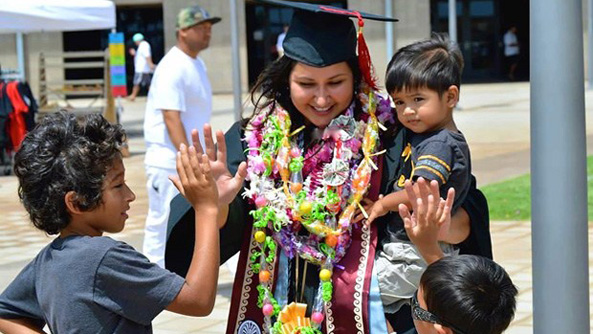 Danielle Pagat transferred to the University of Hawaiʻi at West Oʻahu from Leeward Community College before earning her associate degree. Then in her junior year, she received some unexpected and welcomed news. Pagat was notified that she had earned her associate degree from Leeward CC by reverse transfer, a growing trend in higher education that awards two-year degrees to students who complete credit requirements between more than one institution.

“It’s mini steps,” said Pagat. “Knowing that I had my associate degree and seeing that I was more than halfway there, it pushed me to get my four year degree.”

UH leads the nation in reverse transfer and its success was highlighted in a recent study by Credit When It’s Due (CWID), a national initiative to fund and promote reverse transfer practices.

Hawaiʻi is one of 12 initial states awarded CWID grants to develop and implement reverse transfer programs. According to the study, most other states that received grants saw a two- to five-percent increase in degrees awarded, compared to UH’s increase of nearly 18 percent.

UH’s systemwide student information systems enable UH to analyze comprehensive student records, course equivalencies and degree requirements across all 10 campuses to identify UH community college transfer students who have completed the requirements for an associate degree. Qualified students are then notified and the degree is formally awarded.

“In the past, when these students were unable to finish their baccalaureate degree for whatever reason, they were left without any college credential,” explained UH Vice President for Community Colleges John Morton. “Now, through the reverse transfer process these students receive the associate degree they have earned—all done automatically and permanently entered into their academic record—so they can join the proud ranks of UH degree holders.”

Hawaiʻi a model for the nation

“This is another compelling example of how the University of Hawaiʻi is setting a model for the nation in how campuses can work together to add value for students and address statewide needs,” said UH President David Lassner. “Following on the nationwide acclaim for our 15 to Finish campaign, our reverse transfer capability and our STAR Graduation Pathway System, both of which leverage our shared information systems, are additional examples of UH becoming a high performance system in ways that other states are still striving to achieve.”

“Reverse transfer seems to reflect a larger strategy at the UH System to increase student success rates, smooth transfer pathways, and ensure that students receive a college credential if they’ve earned it,” said Taylor, an assistant professor in educational leadership at the University of Utah. “Hawaiʻi’s reverse transfer efforts and policies are a model for other states and systems who are committed to transfer student success and to smoothing the transfer process.”

Pagat graduated from UH West Oʻahu with a bachelor’s degree in social science and says her associate degree gave her peace of mind.

“You never know where your life will take you. Sometimes we can speed up and sometimes we have to slow down. Having been able to fluidly move through the UH system, and being awarded my AA degree along the way, meant that I was well on my way to a great accomplishment, for myself and for my family.”