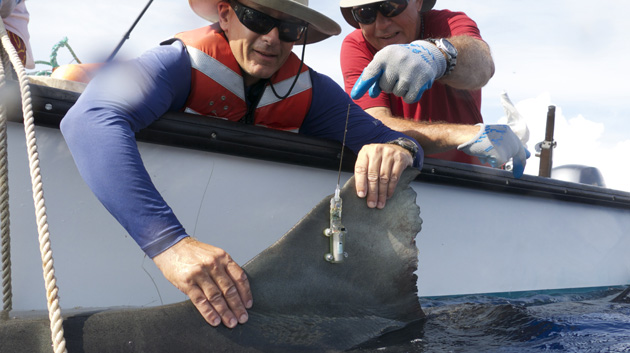 Important research out of the University of Hawaiʻi is providing state leaders with critical information to better develop outreach and awareness efforts to minimize possibly dangerous encounters with tiger sharks. After a spike in shark bites off of Maui in 2012 and 2013, the State Department of Land and Natural Resources turned to the experts at the UH Mānoa Hawaiʻi Institute of Marine Biology (HIMB). After years of work, UH shark researchers Carl Meyer and Kim Holland and a team of students completed an important study in 2016 revealing movement patterns of tiger sharks around Maui and Oʻahu.

“We tagged 41 tiger sharks off Maui and Oʻahu and tracked their movements for two years,” Meyer explains. “We found that these sharks spent most of their time over insular shelf habitats—this is the gently-sloping area between the shoreline and the shelf break at a depth of around 600 feet. These shelf habitats are home to a wide variety of tiger shark prey, and Maui Nui has more of this shelf habitat than all of the other Main Hawaiian Islands combined.”

The large area of shelf habitat around Maui attracts tiger sharks from other parts of Hawaiʻi and the sharks that regularly reside in Maui Nui are less likely to travel away from the area. The study also found that tiger sharks frequently visit areas around Maui that are adjacent to popular ocean recreation sites.

“This combination of factors may explain why Maui has had more shark bites than other Main Hawaiian Islands, although we cannot completely rule out a higher number of ocean recreation activities on Maui as the primary cause of these differences,” said Meyer. “However, despite the routine presence of large tiger sharks in waters off our beaches, the risk of being bitten remains extremely small, suggesting tiger sharks generally avoid interactions with people.”

This study provided important new insights into tiger shark movement behavior around Maui, and helps answer some questions about why that island has led the state recently in shark bites.

“We agree with the study’s recommendation that the best approach to reducing numbers of these incidents is to raise public awareness of what people can do to reduce their risk of being bitten. This has been our focus for a long time,” said Bruce Anderson, administrator for DLNR’s Division of Aquatic Resources. “People who enter the ocean have to understand and appreciate that it is essentially a wilderness experience. It’s the shark’s house, not ours.”

The Division of Aquatic Resources will continue to work with other agencies to expand outreach regarding hazards in the ocean, such as drownings, to include shark safety information so people can make well-informed, fact-based decisions.

Based on the current and previous studies, Meyer discredits shark culling practices in Hawaiʻi. “What we now know when we look back at these historic efforts is that they had absolutely no effect on either eliminating or reducing the number of bites that have occurred.”

Tiger sharks tracked around Maui exhibit a broad spectrum of movement patterns, which ensures a constant turnover of sharks along coastal locations. Sharks removed by culling are soon replaced by new sharks from both local and distant sources.

“We are pleased to be a partner in this important effort by offering an online platform where you can view the tiger sharks tracks. Providing ocean users, agencies, residents and visitors with relevant ocean data is our priority,” said Melissa Iwamoto, director of PacIOOS. “While the tracks do not serve as a warning or real-time monitoring system, they are a great way to raise awareness about the ocean environment and to inform long-term decision-making.”

The U.S. Integrated Ocean Observing System, PacIOOS and HIMB will continue their partnership to bring animal tracking to the next level. Through advanced satellite tags, sharks and other large pelagic fish can serve as an excellent resource to collect ocean observation data and increase our understanding of ocean dynamics.

From the Hawaii Department of Land and Natural Resources, May 19, 2016.

Tagging a tiger shark off Maui