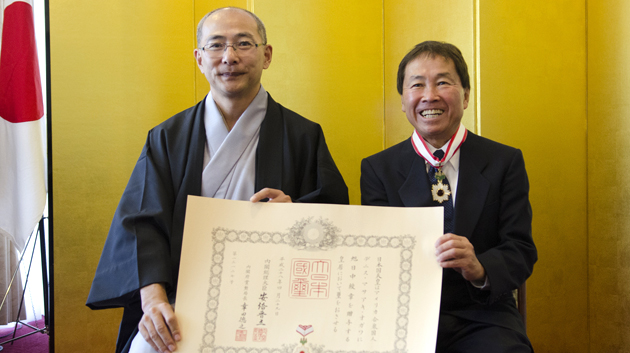 University of Hawaiʻi at Mānoa American studies Professor Dennis Masaaki Ogawa received a medal from the Emperor of Japan on May 23 at an Imperial Decoration Ceremony at the Consulate General of Japan in Honolulu.

Ogawa received the Order of the Rising Sun, Gold Rays with Neck Ribbon from Consul General Yasushi Misawa for his “contribution to the development of Japanese studies in the United States of America and promotion of mutual understanding between Japan and the United States,” according to the consulate’s official announcement.

“I am extremely humbled and grateful for this honor,” said Ogawa. “It is so special, especially as a Japanese American to be honored by the Japanese government but also to know that most of my work has been to build relations between America and Japan.”

Misawa offered his heartfelt congratulations at the ceremony and asked that Ogawa continue his work.

“I sincerely hope that Dr. Ogawa will lend his steadfast focus and his defined leadership qualities so we may continue this strong relationship in the coming years,” said Misawa.

The Order of the Rising Sun, Gold Rays with Neck Ribbon honor was created in 1875. It is awarded to those who have “distinguished achievements in their field of endeavor.” It is one of the highest honors the Nation of Japan can bestow for an individual. Film director and star Clint Eastwood, former owner of the Los Angeles Dodgers Peter O’Malley and notable scholar and translator of Japanese literature Edward Seidensticker were previous awardees.

Since 1969, Ogawa has been a professor of intercultural communication at the UH Mānoa American studies department where he pioneered the first courses on Japanese Americans. He has received numerous honors and awards for his academic work.

Ogawa has also authored many books including the best seller Jan Ken Po: The World of Hawaiʻi’s Japanese Americans and Kodomo No Tame Ni—For The Sake of The Children. In addition to his efforts as an educator and author, Ogawa is also the chairman of the Nippon Golden Network, a television channel that features movies and programs Hawaiʻi about Japan, its people, language and culture.

Ogawa received his PhD from UCLA in 1969 where he was one of the founders of the university’s Asian American Studies Center. He was born in a World War II Japanese American concentration camp in Manzanar, California.

Photos from the ceremony