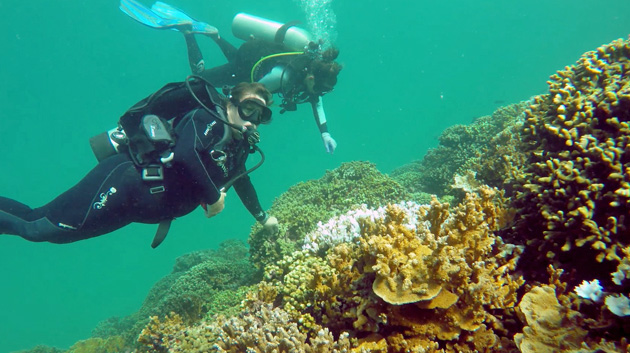 Experts say the world’s coral reefs are in severe decline. Coral bleaching reached historic levels over the last several years. This important ecological, economical and cultural resource is at risk.

That is why about 2,500 delegates including three Pacific heads of state met in Hawaiʻi in June for the 13th International Coral Reef Symposium.

The meeting’s convener, the University of Hawaiʻi at Mānoa’s director of the Kewalo Marine Laboratory Robert Richmond helped to bring the meeting to the state for the first time.

“The idea was to bring it to Hawaiʻi, not only to showcase all that we have to offer but also as a wakeup call to the people of Hawaiʻi,” said Richmond.

According to Richmond, coral reefs are valued at $9.9 trillion dollars worldwide and 500 million people depend upon them for biodiversity, coastal protection, fisheries, medicine and tourism and recreation. The estimated value of Hawaiʻi’s reefs is $36 billion dollars with $360 million in annual revenue tied to them.

The good news is that Hawaiʻi is also rich in coral-reef related human resources. One of these is Ruth Gates, the director of UH Mānoa’s Hawaiʻi Institute of Marine Biology, who is researching assisted evolution for corals and is the current president of the International Society of Reef Studies.

Gates helped to present the society’s highest honor, the Darwin Medal, to the Bishop Museum’s senior ichthyologist emeritus John Randall, who earned his PhD at UH Mānoa and has named more fish than anyone in the world over his distinguished career.

Right now, the world’s reefs need all the help they can get from the scientific community and the 70 nations that were represented at the symposium.

“So we can’t sit around and just talk about it any more,” said Richmond. “It’s a real call to action not only from science to management, but from knowledge to action and that’s where the leaders are really helping to communicate with us about let’s stop talking about it and let’s start doing it.“