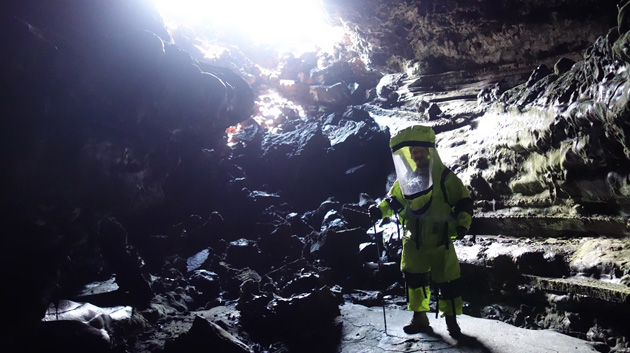 No one ever said space exploration would be comfortable.

Inhospitable environments, deadly atmospheres, the possibility of storms and other natural outer space disasters—how will humans be able to both survive and thrive on places like Mars? One answer, is architecture.

“Our entire lives, on other worlds, are going to be contained within the buildings we make while we’re there or bring with us,” explains Tristan Bassingthwaighte, a crewmember on a year-long, HI-SEAS Mars simulation mission on the island of Hawaiʻi. The NASA-funded mission is run by the University of Hawaiʻi at Mānoa, where Bassingthwaighte is also a graduate student studying architecture for extreme environments.

The harsh conditions on the lava fields that flank Mauna Loa—with the exception of the human-friendly atmosphere—are not so different than Mars, which is home to the largest volcano in our solar system.

“So I’m doing my doctorate while I’m up here, living in fields of lava while trying to design structures for other people to live in other fields of lava someday,” says Bassingthwaighte.

But what form those structures should take remains to be seen.

“Underground, in a dome, in a printed ice dome, in a 3D printed structure, in a tin can,” he explains. “If you’re going to go there for two weeks to try and explore, you’re probably going to have a little mothership up above with maybe one or two inflatable modules and a little tin can lander on the ground.”

“You’re going to want a lot more space and capability, and so you’ll probably be either building structures on the ground or building an inflatable module and hiding in a cave or covering it with regolith, just to protect yourself from the radiation,” adds Bassingthwaighte. “You want to be able to include nature, you want to have the room to move, spaces that don’t feel like they’re confining you all the time.”

The HI-SEAS mission has allowed Bassingthwaighte an extraordinary opportunity to take his classroom learning at UH Mānoa into the field.

“It’s very, very cool to be able to have studied extreme architecture, to have begun designing things for buildings on the moon, or Mars or the Antarctic, and then actually get to come here to live in this same environment that I would if I were building these things for real,” he says. “That’s super awesome.”