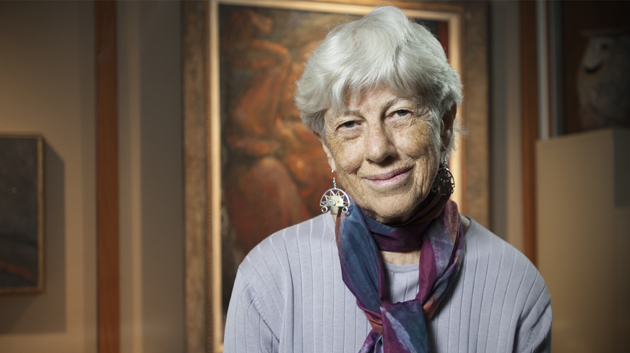 “The last 15 years have been astounding,” declared Bronwen “Bron” Solyom, curator of the Jean Charlot collection at the University of Hawaiʻi at Mānoa Hamilton Library. After some 22 years working as a librarian for the university, Solyom was tapped to be the curator of a vast collection generously donated by the Charlot family: 2,500 books and journals, 2,000 works on paper and 772 images from his master set of prints. “It’s bottomless, I’ve been here 15 years and I’m still looking in every folder and every drawer,” said Solyom.

Jean Charlot (1898-1979) was a renowned artist most widely known for his fresco murals, but also a teacher, art historian, author and philosopher. Born in France, he lived and worked in many places including Mexico and New York before finally settling in Hawaiʻi in 1949. That same year, he painted Relation of Man and Nature in Old Hawaiʻi on the first floor of Bachman Hall on the UH Mānoa campus.

“Just one of my favorite pieces in this collection is a beautiful painting, Idol a large nude,” said Solyom. “The model was Luz Jiménez who was the subject of many of Charlot’s images and a close friend of the family.”

Looking back at her years as curator Solyom, who retired in June 2016, reflected, “This collection attracts so many interesting people and they all come with different agendas and different kinds of information. Because of the huge and unexpected scope of this collection we provide them with answers, they send us their books, they send us their other publications and it’s extremely satisfying in that way. I also love it when I have classes or interns, I look at that with great happy memories.”

Jean Charlot found himself greatly attracted to Native Hawaiian culture, just as he had been interested in the folk aspects of the residents of rural France and the indigenous peoples of Mexico. Four Charlot murals can be found on the UH Mānoa campus: Relation of Man and Nature in Old Hawaiʻi, 1949, Bachman Hall, first floor; Commencement, 1953, Bachman Hall, Second floor; Night Hula, 1961, ceramic tile, Saunders Hall; Inspiration Study, 1967, Jefferson Hall.