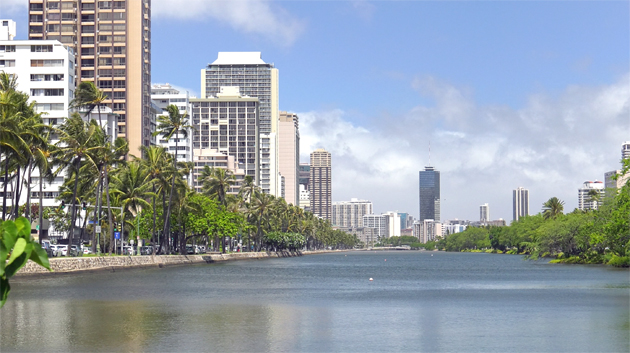 An international design challenge has been launched to rehabilitate a critical Oʻahu watershed that contains one of the nation’s most polluted bodies of water. During the September IUCN World Conservation Congress, University of Hawaiʻi President David Lassner announced the Make the Ala Wai Awesome Student Design Challenge, with up to $10,000 in total prize money for the winning entries.

“We are seeking ideas from the brightest young minds around the world to help us envision an inspiring, large-scale, systems thinking approach towards comprehensive ecosystem restoration of the Ala Wai watershed,” Lassner said. “This competition should generate creative integrated approaches that address flood mitigation, ecosystem restoration and preservation, community engagement, cultural connections, public private partnerships and improvement of the visitor experience.”

Ala Wai watershed is one of the nation’s most polluted

The Ala Wai watershed includes the valleys and streams of Makiki, Mānoa and Pālolo, which drain into the canal and encompass approximately 19 square miles from the mountains to the ocean. The Ala Wai is also the most densely populated watershed in Hawaiʻi, accounting for nearly 20 percent of the island’s population. About 40 percent of the watershed is classified as conservation district land. The remainder is heavily urbanized, supporting single family residences, condominiums, hotels and businesses, as well as many public and private schools, including the University of Hawaiʻi at Mānoa, the largest university in the state.

The man-made Ala Wai Canal stretches for two miles through Waikīkī near the end of the watershed. It was constructed during the 1920’s to drain extensive coastal wetlands for the development of the district. The canal is listed as an impaired water body under the Clean Water Act due to numerous pollutants including nitrogen, phosphorous, sediment, metals, pathogens and pesticides, which derive from the communities and neighborhoods in between the mountain forests and coastal waterways.

Despite significant human health issues associated with poor water quality, the Ala Wai Canal system—including the contributing streams and upland trail systems—has been identified as a regionally outstanding recreational resource. Fishing and paddling sports are popular, and the canal has the largest concentration of canoe clubs in the state. The promenade is heavily used for walking, running, biking and commuting.

Restoring the Ala Wai as a natural and cultural resource

The design competition is linked to the Aloha+ Challenge, Hawaiʻi’s statewide sustainability initiative which identifies six ambitious goals to be achieved by 2030 in the areas of clean energy, local food, natural resource management, solid waste, smart sustainable communities and green workforce and education.

“This project is an important opportunity to restore our natural and cultural resources in the Ala Wai Watershed, where the challenges are daunting and the economic stakes are enormous,” said Neil Hannahs, chairman of the Polynesian Voyaging Society. “This is a tangible example of our collective efforts to leverage our investment in hosting the IUCN World Conservation Congress to build resilience, forge global partnerships, and engage our keiki to ensure a legacy for Hawaiʻi that will endure long after the congress has adjourned.”