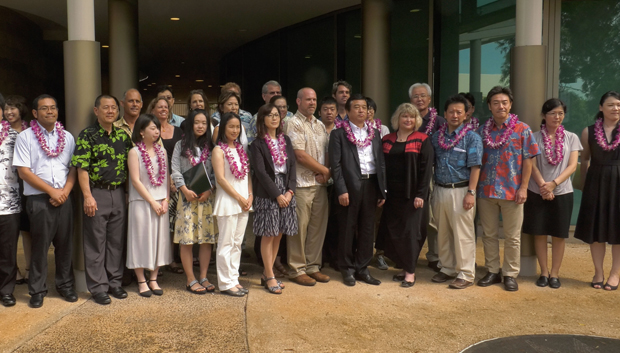 A partnership between the University of Hawaiʻi at Mānoa and Tohoku University, one of Japan’s top research universities is redefining disaster science. The collaboration began shortly after the March 2011 disaster events that struck Japan, including the powerful earthquake that triggered a devastating tsunami. The UH Mānoa College of Social Sciences and the School of Ocean and Earth Science Technology’s Hawaiʻi Sea Grant program have been working with Tohoku ever since.

“This research collaboration has been amazing,” said Denise Eby Konan, dean of the College of Social Sciences. “We’ve been able to take the science but also the human aspect of disasters, elevate our understanding of that to new and higher levels.”

“The partnership that we’ve with the College of Social Sciences and now, of course, with Tohoku University is a really great example of the need to bring together the physical, natural and social sciences to solve these problems,” said Darren Lerner, Hawaiʻi Sea Grant director.

“This multidisciplinary approach is very important,” said Tohoku University’s Yuichi Ono. “We are very good at our physical sciences and we try to increase our social science perspectives but we are still developing. And Hawaiʻi, the University of Hawaiʻi, has very good social scientists there so we want to collaborate to fill in the gap and work together.”

UH and Tohoku share the latest disaster science and bring leading national and international experts together. A September 2016 forum on the Mānoa campus focused on communicating disaster science and covered the latest research, risk reduction, community preparedness—including changes in the way Hawaiʻi prepares for natural disasters—and the human dimension in responding and recovering.

“There is no single discipline that can really solve these very difficult problems that we face,” said Lerner. “This bridging between our university here in Hawaiʻi and universities across Japan is really key if we are going to solve these problems across the Pacific and between our nations.”

“Those kind of exchanges between our students and the students of Japan really are part of what it means to be a global university,” said Konan.