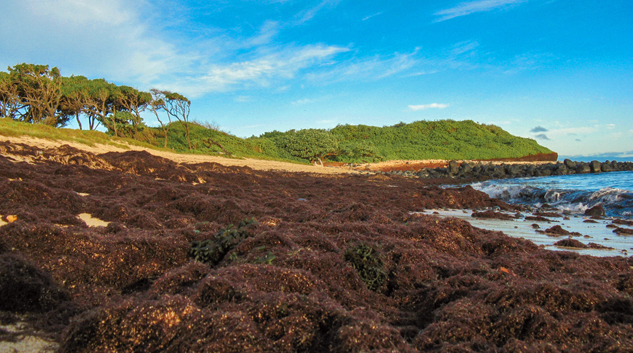 Land-use practices on tropical oceanic islands can have large impacts on reef ecosystems, even in the absence of rivers and streams. Land-based pollutants, such as fertilizers and chemicals in wastewater, infiltrate into the groundwaters beneath land and eventually exit into nearshore ecosystems as submarine groundwater discharge (SGD)—seeping into the coastal zone beneath the ocean’s surface. In a study published recently in PLOS ONE, University of Hawaiʻi at Mānoa scientists used a combination of field experiments and chemical analysis of water and algae to show that the quality of coastal groundwater plays a major role in determining the health of nearshore ecosystems in Hawaiʻi.

Various sources of pollution, such as agriculture or sewage treatment facilities, have identifiable chemical signatures, particularly the isotopes of nitrogen in the nutrients they contain. This study assessed groundwater quality, coastal water quality and reef health across six different bays on Maui with various potential sources of pollution. By comparing the nitrogen isotope signature of algae tissues and potential pollution, the research group traced nutrients in the algae back to their land-based sources.

This study is the first to show the extent of the impact of wastewater injection wells at Kahului Wastewater Reclamation Facility, Maui’s highest-volume sewage treatment plant, on Kahului Bay. In addition to relatively high nutrient levels in marine surface waters in Kahului Bay, shallow areas were almost entirely dominated by a thick fleshy mat of colonial zoanthids, a phenomenon not reported anywhere else in the state. A concurrent companion study to this work, led by James Bishop at the UH Mānoa Department of Geology and Geophysics, found that water collected from beach sands, which represents coastal groundwater, next to the Kahului Wastewater Reclamation Facility contained up to 75 percent treated wastewater—highlighting the impact of wastewater in this area.

“Our timely study builds on previous research from UH scientists and recent federal court rulings that show that treated wastewater is illegally discharged to the ocean from injection wells at the Lahaina Wastewater Reclamation facility via SGD to Kahekili Beach Park on West Maui,” said Daniel Amato, lead author and recent graduate of the UH Mānoa College of Natural Sciences. “This is not an isolated or unique occurrence.”

Reefs adjacent to large areas of sugarcane agriculture were the most impacted of all the sites in this study. At Kūʻau and Māʻalaea Bays, coastal waters contained nearly 100 times more nitrogen than less impacted locations due to fertilizer-enriched SGD. These high levels of nutrients were reflected in the tissues of common macroalgae and measures of reef community structure. A few species of macroalgae dominated intertidal and subtidal surfaces at Kūʻau and Māʻalaea Bays. In contrast, areas where coastal groundwater nutrient levels were relatively low, researchers observed much greater diversity and corals were generally present, indicating a healthier, potentially more robust, ecosystem.

This study suggests that contaminated groundwater may present a chronic risk to nearshore marine ecosystems throughout the main Hawaiian Islands. These results are especially significant for coastal managers and lawmakers who will influence the future of land-use policy in Hawaiʻi. Of particular future interest is the possible benefit gained in health of our reefs by the reduction in Maui’s sugarcane production. Reducing groundwater pollution could result in future increases in reef health and decreases in the occurrence of nuisance algal blooms for impacted areas.

“The long-term goal of this research group is to bridge the disciplines of hydrology, geochemistry and marine biology to help answer pressing questions regarding the source and impact of nutrient pollution in Hawaiian coastal waters,” said Craig Glenn, Henrietta Dulai and Celia Smith, the collaborating principal investigators and co-authors of the Hawaiʻi Sea Grant project.

These studies were funded by the University of Hawaiʻi Sea Grant College Program and a U.S. Environmental Protection Agency STAR Graduate Fellowship.