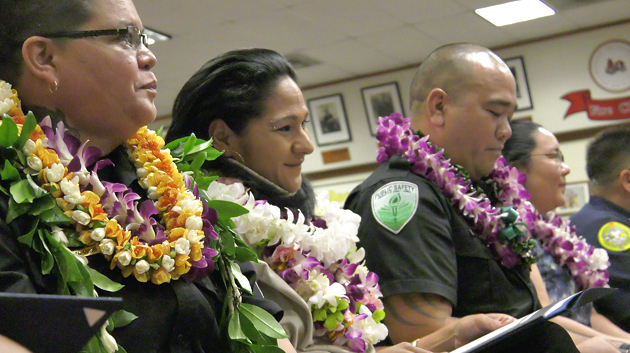 The Honolulu Fire Department presented Certificates of Commendation to University of Hawaiʻi at Mānoa public safety officers and a student at a ceremony on November 17, 2016. The Honolulu Fire Department awards a certificate of commendation to those who have subjected themselves to personal risk by performing exceptional acts of service or bravery.

The certificates were presented to UH Mānoa’s Department of Public Safety Sergeant Bridget Evangelista-Gouveia, Officers Savannah Alpuro and Irenio San Nicolas and student Jan Kealoha who rescued a visiting researcher who was injured and trapped by a laboratory accident that occurred at the UH Mānoa campus on March 16, 2016,