The University of Hawaiʻi at Mānoa will become the third Preservation Steward library in the U.S. Government Publishing Office (GPO) Federal Information Preservation Network. The university signed a memorandum of understanding with GPO. 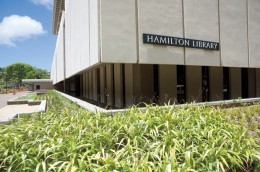 Under this agreement, the library pledges to permanently preserve print collections of United States Reports, the official record of the U.S. Supreme Court. The volumes contain the ruling, orders, and other proceedings of the Supreme Court.

“The government documents and maps department at UH Mānoa is excited to be one of the first three federal depository libraries to become a Preservation Steward,” said Librarian Gwen Sinclair. “We selected United States Reports for our initial entry into the Federal Information Preservation Network program because it is one of the few titles for which we have a complete set.“

The UH Mānoa collection contains 555 volumes of the reports from 1817 through 2016. The library also has copies of the earlier volumes (1798–1816) that were privately published without any federal assistance.

“Although 95 percent of our collection was destroyed in the October 2004 flood, these volumes were undamaged because they were shelved in the main collection at Hamilton Library and at Sinclair Library,” said Sinclair. “The University of Hawaiʻi came into existence in 1907, but our collection of volumes extends all the way back to 1798. Early volumes acquired from other libraries by UH librarians include an 1895 volume from the Supreme Court of the Hawaiian Islands. The UH Mānoa Library looks forward to preserving these important records of the United States Supreme Court for many years to come.”

“GPO welcomes The University of Hawaiʻi at Mānoa into this important program of maintaining government information in all platforms,” said GPO Director Davita Vance-Cooks. “I encourage more libraries to become part of this venture of preserving valuable print collections of government information.”