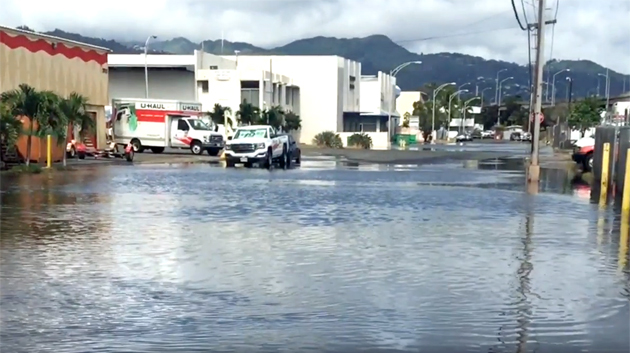 New research from the University of Hawaiʻi at Mānoa reveals a large part of the the heavily urbanized area of Honolulu and Waikīkī is at risk of groundwater inundation—flooding that occurs as groundwater is lifted above the ground surface due to sea level rise. Shellie Habel, lead author of the study and doctoral student in the Department of Geology and Geophysics, School of Ocean and Earth Science and Technology (SOEST), and colleagues developed a computer model that combines ground elevation, groundwater location, monitoring data, estimates of tidal influence and numerical groundwater-flow modeling to simulate future flood scenarios in the urban core as sea level rises three feet, as is projected for this century under certain climate change scenarios.

“This flooding will threaten $5 billion of taxable real estate; flood nearly 30 miles of roadway; and impact pedestrians, commercial and recreation activities, tourism, transportation and infrastructure,” said Habel. “The flooding will occur regardless of seawall construction, and thus will require innovative planning and intensive engineering efforts to accommodate standing water in the streets.”

Surprisingly, the team of researchers also discovered 86 percent of active cesspools in the study area are likely currently inundated by groundwater. This suggests that cesspool effluent is now entering coastal groundwater and coastal environments in the study area. Sea level rise of approximately three feet would fully inundate 39 cesspools, introducing effluent at the ground surface where people work and live. This presents a serious health concern that will become progressively more serious as contaminated waters begin breaching the ground surface.

They also found that the water table is close to the ground surface—within two feet at high tide—in many places. This narrow unsaturated space means that groundwater inundation will become a serious concern well before the end of the century. When it rains and infiltration fills this space, it is a problem already.

“Waikīkī, the gateway of the state’s tourism industry, currently has such narrow unsaturated space that many construction projects working below the ground surface have to dewater the excavation before construction can begin,” said Habel.

“Our findings suggest that coastal communities in Hawaiʻi and globally are exposed to complex groundwater flooding hazards associated with sea level rise in addition to the typical concerns of coastal erosion and wave overtopping,” said Chip Fletcher, professor of geology and geophysics, associate dean of SOEST and principal investigator on the study. “Groundwater inundation will require entirely unique adaptation methods if we are to continue to live in and develop the coastal zone. Coastal planners and community stakeholders will need to work with architects, engineers, geologists, ecologists, economists, hydrologists and other innovative thinkers in order to manage these problems.”

This study identified particular locations and infrastructure that will be vulnerable to future flooding and is a crucial first step towards addressing future challenges. The team of researchers hope to use this methodology to identify future flooding and at risk infrastructure in other locations, as well as assist in developing adaptation efforts among vulnerable coastal communities.

This work was funded by Hawaiʻi Department of Land and Natural Resources, the Honolulu Board of Water Supply, UH Sea Grant and and HKL Castle Foundation.