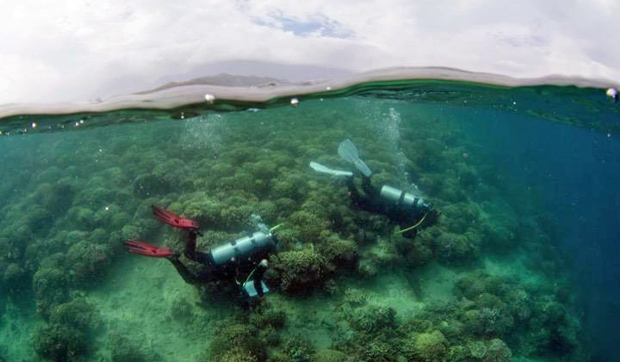 Researchers at University of Hawaiʻi at Mānoa’s Hawaiʻi Institute of Marine Biology (HIMB) were recently awarded a $1.026 million grant from NASA to develop coral disease forecasting models for Hawaiʻi, U.S.-affiliated Pacific Islands and the Great Barrier Reef. Megan Donahue, principal investigator and HIMB researcher, and Jamie Caldwell, HIMB post-doctoral fellow on the project, will lead an international team as they combine field work, experimental work, previously collected data and satellite data to predict disease risk up to six months before an expected outbreak.

Scientists Mark Eakin, Scott Heron and Bernardo Vargas-Angel from the National Oceanic and Atmospheric Administration (NOAA) Coral Reef Watch and Coral Reef Ecosystem Program are co-investigators on the grant, and Tracy Ainsworth and Bill Leggat of James Cook University in Australia are key participants on the four-year project.

Coral diseases are considered one of the major contributors to coral reef decline worldwide. Corals are more likely to contract diseases when they are stressed; for example, due to poor land use practices that increase runoff, and climate change, which warms the ocean.

Currently, NOAA Coral Reef Watch produces an experimental coral disease outbreak risk assessment tool based on one coral disease. The new grant will allow the research team to refine and expand the model for multiple coral diseases and to new regions.

“Predictive tools can guide reef managers and scientists to where outbreaks are most likely, which can target response actions to minimize stressors in those locations,” said Eakin. “Importantly, survey observations from these sites can feed back into the development process to further improve the tools.”

This research will make use of coral health observations from previously collected underwater visual surveys conducted since 2004 from researchers at academic institutions, state and federal agencies from Hawaiʻi, Guam, American Samoa and Australia. Targeted fieldwork will further aid development of the models and provide insight into the mechanisms of disease onset.

“What I love about modeling these relationships with data from a broad geographic region is that we can start to distinguish patterns about outbreak events, which are notoriously difficult to predict in space and time,” said Caldwell. “Moreover, once we start to quantify these relationships, we can identify specific gaps in our knowledge and design future experiments to fill in that missing information, which will ultimately feed back into improving the model predictions.”

The anticipated coral disease forecasting products will update automatically with incoming data of sea surface temperature from satellites and climate models, along with other variables known to affect coral health such as rainfall and water quality, and alert any interested parties of potential outbreak events. NOAA will continue to distribute these products after the grant ends.

Should an outbreak occur during the funding period, the team will intensively survey those sites to better understand the coral stress response during the rise and fall of an outbreak event. Using cutting edge techniques pioneered by Ainsworth and Leggat, the researchers will help determine species-specific responses to environmental stressors, prior to visible lesions.

“This aspect of the work is really exciting because underwater visual surveys rely on disease lesions we can see with the naked eye, at which point the coral is already very affected by the disease,” said Caldwell. “Ultimately we want to predict pre-visible signs of stress so we can target management efforts to reduce stressors before a disease arises.”

“The models we are developing will improve our understanding of when, where, and why coral diseases occur,” said Donahue. “To make sure these products are developed in a way that is useful, we will host a workshop on June 26 to bring together scientists with the managers who will likely use the models once they are developed.”