Since its founding on July 1, 1967, the University of Hawaiʻi at Mānoa Institute for Astronomy (IfA) has played a role in almost every significant astronomical discovery. IfA is responsible for the observatories on Maunakea, the most productive astronomy site in the world, and on Haleakalā, the world leader in asteroid and Near Earth Object detection. IfA recently celebrated its 50th anniversary. 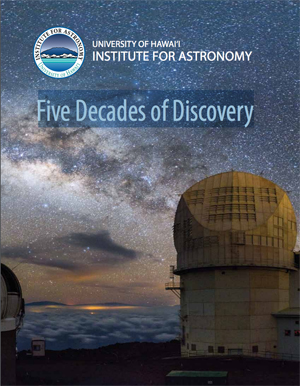 UH President David Lassner said, “The Institute for Astronomy is clearly one of our superstars in research.”

IfA graduate and Native Hawaiian Heather Kaluna was born and raised in Pāhoa on the Island of Hawaiʻi and will begin teaching astronomy as an associate professor at UH Hilo in the fall.

“The maintaining and strengthening of IfA’s outreach programs, which weren’t around when I was growing up, are important opportunities to continue nurturing IfA’s student body with more of Hawaiʻi’s keiki,” said Kaluna. She added that IfA outreach programs have the power to fill children with pride in the “world class science taking place here at home.”

IfA is looking forward to another 50 years of cutting edge astronomy.

On Maunakea, all of the observatories will remain competitive for the foreseeable future. UH’s renovated 2.2-meter telescope will be upgraded with a new adaptive optics system. A specialized 10-meter telescope, able to collect thousands of spectra simultaneously, may replace the Canada-France-Hawaiʻi Telescope. Another important frontier is the Thirty Meter Telescope; IfA remains hopeful that construction will begin in early 2018.

The Daniel K. Inouye Solar Telescope, the largest solar telescope in the world, will advance the frontiers of solar physics. The first Pan-STARRS telescope reports more discoveries of solar system objects and supernovae than all other current surveys combined. The second Pan-STARRS telescope will improve the odds of finding new objects in the solar system, especially asteroids that come close to the Earth. The ATLAS telescope, paired with one on Maunaloa, will find dangerous asteroids on a collision course with the Earth. A dedicated high-contrast PLANETS (Polarized Light from Atmospheres of Nearby Extra-Terrestrial Systems) telescope is also planned.

IfA hopes to build additional ATLAS telescopes in the southern hemisphere. There is a proposal for a Hawaiʻi Orbiting Space Telescope to conduct sky surveys, and also the possibility of working jointly with the European Space Agency’s Euclid mission to measure the cosmological acceleration of the universe.

IfA Director Günther Hasinger said, “With these wonderful resources and an ongoing investment in our world-class faculty and students, IfA will pursue a vibrant range of research programs, making discoveries we cannot even imagine today. Through our education and community programs, we will engage the next generation of astronomers with the amazing opportunities we enjoy in our own backyard, and ensure that the IfA and Hawaiʻi remain exceptional places for astronomy for at least 50 more years.”