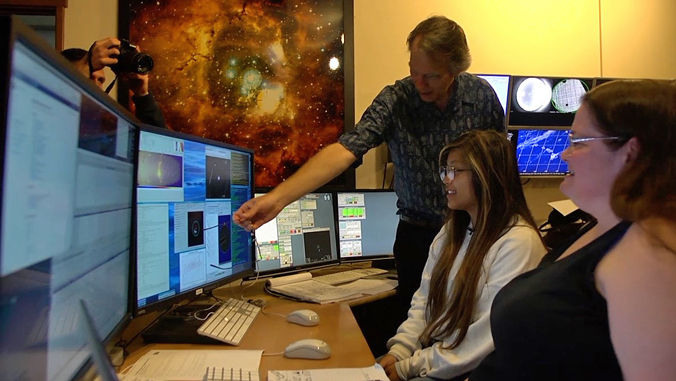 The Maunakea Scholars program, designed to bring Hawaiʻi’s high school students into one of the world’s most advanced observatory communities, has dramatically expanded for the 2017–2018 school year to serve more local kids. The program announced its tremendous growth recently at the Future Focus Technology and Research Conference.

“Maunakea Scholars is an unprecedented program,” said Kaʻiu Kimura, executive director of the ʻImiloa Astronomy Center. “It is a collaboration between the Department of Education, the University of Hawaiʻi and Maunakea Observatories, coming together for the purpose of providing amazing opportunities to the next generation.”

Launched in 2015 and now working with its third cohort of student astronomers, the program has seen explosive growth to keep pace with demand from local schools as the only partnership of its kind internationally. 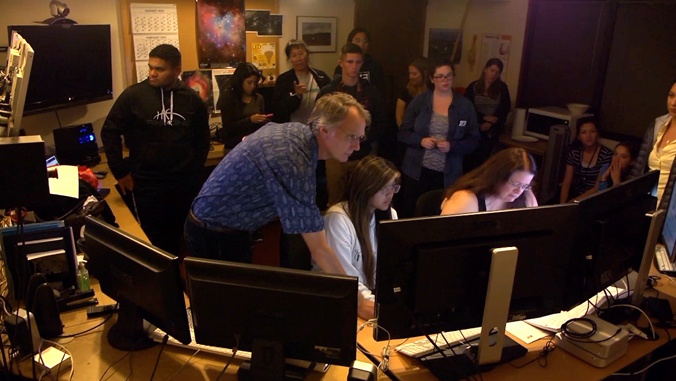 The program works by pairing a professional astronomy mentor with the students in each participating school to coach them through the process of interpreting astronomy data and crafting an original research proposal. The proposals are submitted to a time allocation community for consideration, and projects are awarded highly-valuable time on participating telescopes based on the merit and viability of the proposals.

Maunakea Scholar mentor and UH Mānoa astronomy graduate student Jessica Stasik said, “I can use some of the best telescopes in the world, so UH has this unparalleled access for students and we now get to give some of that to the younger generation, and that’s really important.”

I actually got to go to Maunakea and I got to see the Canada-France-Hawaiʻi Telescope and I got to see…what astronomers are using to collect my data on.
—Maunakea Scholar and Nānākuli High School senior Amber Nakata

Research ideas have included eclipsing x-ray binary systems, an in-depth look at star forming regions and how they retain their shapes, study of possible life in other areas of the solar system and comparing elements in different supernova remnants and more.

“My observing experience has been crazy so far,” said Maunakea Scholar and Nānākuli High School senior Amber Nakata. “I actually got to go to Maunakea and I got to see the Canada-France-Hawaiʻi Telescope and I got to see … what astronomers are using to collect my data on.”

Throughout the year, Maunakea Scholars supports each classroom with educational resources, including an integrated indigenous Hawaiian perspective to modern science education, led by ʻImiloa Astronomy Center’s MANU ʻImiloa program. ʻImiloa was created to respond to the Western dichotomy view of “science” vs. “culture,” by providing a space where the two can coalesce, where culture makes science relevant, and where new and improved solutions become possible. This holistic approach can make science learning more effective and allows Maunakea Scholar students to understand what they are observing in more impactful way.