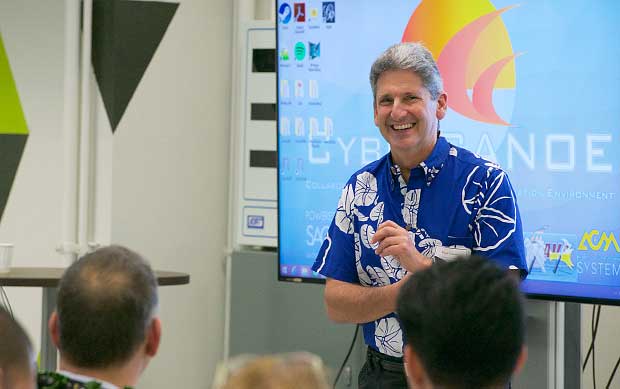 University of Hawaiʻi President David Lassner was honored with the Corporation for Education Network Initiatives in California (CENIC) Christine Haska Distinguished Service Award for his extensive work in research and education technology. Established in 2018, the award honors an individual who has provided extraordinary leadership and service to the CENIC community and its partners.

Over the last three decades, Lassner has led projects to connect UH and critical global scientific instruments in Hawaiʻi. He has also led efforts to connect community anchor institutions throughout Hawaiʻi and the Pacific Islands to UH, the mainland U.S. and nations throughout the Asia-Pacific region. His work has helped advance science and education, preserve environmental and cultural resources, connect communities and enrich myriad lives throughout the Pacific Islands.

David Lassner’s vision, leadership and championing of connectivity for the Pacific Islands has spanned decades.
Louis Fox, president and CEO of CENIC

“David Lassner’s vision, leadership and championing of connectivity for the Pacific Islands has spanned decades. During that time, he worked to overcome complex economic and geographic challenges to advanced networking,” said Louis Fox, president and CEO of CENIC. “His gentle guidance, tenacity and vision have inspired much of the remarkable progress in the Asia-Pacific region, especially in the Pacific Islands. His skillful leadership has been inspirational to all of us who work in the R&E (research and education) community.”

Lassner has been involved with two key projects that are critical to the future of the Asia-Pacific region. He has served as principal investigator since the inception of the Pacific Islands Research and Education Network (PIREN), which provides domestic support (with CENIC’s assistance) for Australia’s Academic and Research Network’s 2 x 100 Gbps links, as well as critical connectivity to major astronomy sites at Maunakea and Haleakalā. Through PIREN, Lassner and UH have been champions of bringing high-speed research and education networking to the Pacific Islands.

The second project is a direct result of Lassner’s vision for PIREN: the creation of an international research and education exchange point for the Pacific Islands on Guam.

Lassner will receive the award at the CENIC conference March 5–7 in Monterey, California.