After two years of investigating the cause of death of a Fraser’s dolphin that was stranded on Maui in 2018, researchers discovered a novel strain of morbillivirus, a marine mammal disease responsible for deadly outbreaks among dolphins and whales worldwide. The University of Hawaiʻi at Mānoa Health and Stranding Lab conducted the necropsy (an animal autopsy) and published the report of the morbillivirus discovery in Nature Scientific Reports. It is the first linked to this dolphin species.

“The 2018 stranding of the Fraser’s dolphin revealed that we have a novel and very divergent strain of morbillivirus here in Hawaiian waters that we were previously unaware of,” said Kristi West, associate researcher at UH Mānoa’s Hawaiʻi Institute of Marine Biology who directs the Health and Stranding Lab. “Morbillivirus is an infectious disease that has been responsible for mass mortalities of dolphins and whales worldwide. It is related to human measles and smallpox.”

The discovery led to a suite of independent tests (immunohistochemistry, culturing of the virus and transmission electron microscopy) to confirm the finding and understand the role of this distinct morbillivirus in the pathology of the Fraser’s dolphin. The UH Health and Stranding Lab only recovers less than 5% of the dolphins and whales that die in Hawaiian waters, which makes detecting disease outbreaks very difficult. 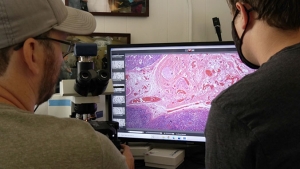 Threatening extinction to other Hawaiʻi species

Fraser’s dolphins are a poorly known pelagic species found throughout the world’s oceans. This research identifies morbillivirus as a significant threat to Fraser’s dolphins, which are highly social and interact closely with other dolphins and whales in Hawaiian waters.

“It’s also significant to us here in Hawaiʻi because we have many other species of dolphins and whales—about 20 species that call Hawaiʻi home—that may also be vulnerable to an outbreak from this virus,” said West. “An example is our insular endangered false killer whales—where there is only estimated to be 167 individuals remaining. If morbillivirus were to spread through that population, it not only poses a major hurdle to population recovery, but also could be a threat to extinction.” 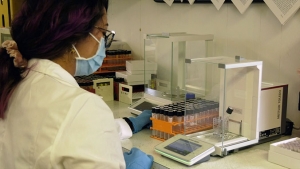 Other species of Hawaiʻi’s dolphins and whales may have acquired immunity to morbillivirus through prior exposure but this can only be determined through antibody testing, which has not been conducted to date. The next step in determining if this virus is circulating in the Central Pacific is to focus on antibody testing of Hawaiian dolphins and whales. Further research would aid in evaluating the vulnerability of Hawaiian species to the novel Fraser’s morbillivirus.

“This research is part of the work of the Health and Stranding Lab, which provides hands-on opportunities for UH students to be involved in all aspects of stranding and research,” said West. “This also is anticipated to bring greater recognition to UH’s role in looking at infectious disease in Hawaiian marine mammals and how the strains found here in Hawaiʻi compare to those that have been described in other regions of the world.”

A significant challenge is that marine mammal carcass recovery rates are very low, which emphasizes the importance of the public’s role in rapid reporting of whale and dolphin strandings and the value of thoroughly examining every carcass. Sightings of dead or distressed marine mammals can be reported to the toll-free statewide NOAA Marine Wildlife Hotline at 1(888) 256-9840.