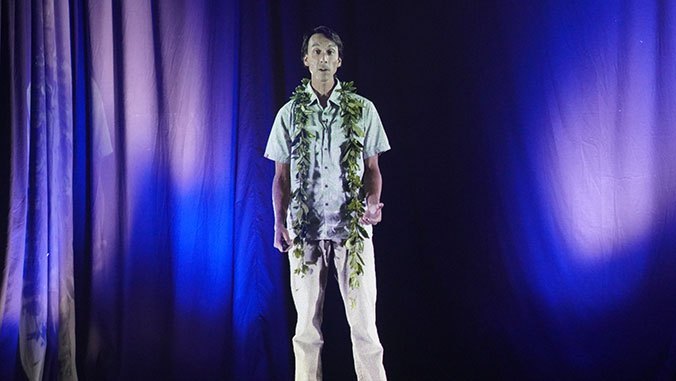 American Samoa Community College (ASCC) has switched on a ground-breaking digital platform that will stream 3D holograms of University of Hawaiʻi faculty members to deliver classes and engage with ASCCstudents in real-time. Students and officials at the HoloCampus launch on August 20 received a lecture by UH Mānoa Water Resources Research Center researcher Chris Shuler on the subject of “sustainability and resilience,” a theme with special significance for the people of American Samoa and Pacific Islands nations as they face challenges such as increasing plastic waste and more dramatic weather systems brought about by climate change.

Running on Hawaiki transpacific submarine cable, which directly connects American Samoa and Hawaiʻiusing technology from Canadian tech firm ARHT Media, the HoloCampus solution is the first of its kind in the Pacific, and is set to redefine how schools and universities connect and collaborate in the region.

“HoloCampus enables a remarkable new approach to distance learning,” said UH President David Lassner. “We expect that our work with ASCC will spark new ideas and approaches for academic collaborations across the Pacific and beyond.”

Researcher Chris Shuler teaches to a class in Samoa from a studio in Mānoa.

ASCC and UH are working together to create specific course programs running on HoloCampus, which could lead to students in American Samoa earning credits and grades toward UH degrees, with UHacademics and students benefiting from greater access to ASCC and its teachers, learning and resources.

“It’s definitely super cool to go to American Samoa as a hologram. This setup is kind of novel. Doing distance learning on larger screens or on Skype is pretty cool and I think this new internet connectivity is really going to make that a possibility,” said Shuler who presented his recent research done in American Samoa.

He added, “The main goal of our American Samoa research program is to improve peoples lives in the territory. Working in such a remote location necessitates some creativity, so some things that make our program distinctive are: 1) a huge focus on building and maintaining relationships with key stakeholders and 2) continuing experimentation with recent advancements in cyber-infrastructure, social networking, and open-source cloud-computing tools to make our work accessible to those who need it, despite the big distances between islands.”

“HoloCampus is a culmination of the vision and hard work of many people inspired by the challenge of harnessing technology to provide American Samoa’s young people with access to the best opportunities for advancing their education, and creating a better future for them and their communities,” said Governor Lolo M. Moliga.

Moliga added, “The partnership between Hawaiki and American Samoa has delivered on its promises to bridge the digital divide in our Territory. Having ready access to high speed internet is already helping high school and college students with their learning, but the ability to have academics from around the world literally beamed into ASCC classrooms offers an exciting glimpse into what education and learning will look like in the future.”

ASCC President Rosevonne Makaiwi Pato noted that HoloCampus will also spur new opportunities for American Samoa to more effectively share knowledge and insights from the U.S. territory with UHstudents and academics, and potentially more academic institutions in the region and throughout the world as the technology is deployed more widely.

The launch of HoloCampus comes just 13 months after the Hawaiki cable went live in American Samoa, resulting in a dramatic increase in connectivity on the U.S. territory.

Holograms are created using ARHT’s patented “capture studios,” which allow people and 3D content to be broadcast live, virtually anywhere, in HD or 4K, on a variety of devices, with virtually zero latency.

A speaker can see the room via a video signal back to the capture studio and speak to students responding to their questions and reactions in real-time.

Streaming on platforms like Facebook and YouTube is quick and easy, while broadcasts are also able to be recorded to the cloud and shared after the event.