🎥 Jeff Reaser – Language as part of the diversity cannon 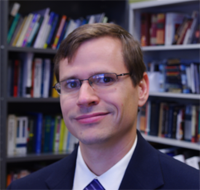 Despite being a crucial social marker of many of these groups, dialect and language variation has remained outside of the diversity canon. Even as sociolinguistic information has begun to permeate teacher education programs, linguistically aware teachers are often stifled by a paucity of materials that teach about language variation. In this talk, Dr. Jeffrey Reaser will discuss and share examples of the first state-based dialect awareness program to be developed and implemented in the United States, Voices of North Carolina: Language and Life from the Atlantic to the Appalachians (Reaser and Wolfram 2007). The curriculum, designed for middle school students, offers teachers and students an opportunity to investigate regional and social dialects, including Appalachian English, Outer Banks English, African American English, and Lumbee Indian English. It also explores the use of Spanish and the revitalization of Cherokee in the state. In collaboration with a team of professors and teachers, Dr. Reaser has developed and implemented the curriculum in social studies classrooms in order to explore the historical, social, political, and linguistic aspects of language.

Jeffrey Reaser is an Associate Professor of English at NC State University where he coordinates the secondary English education program and contributes to the North Carolina Language and Life Project. His research examines the effectiveness of formal and public education linguistics projects. With Walt Wolfram, he co-authored Talkin’ Tar Heel: How Our Voices Tell the Story of North Carolina (2014), which was nominated for the Linguistics Society of America’s Leonard Bloomfield award. He has served on the American Dialect Society and the editorial boards of American Speech and Language.