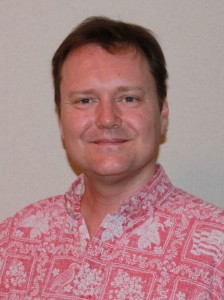 PhD, University of Hawai‘i at Mānoa

Eric Hauser is a graduate of the department’s MA program (1999) and PhD program (2003). Since 2003, he has worked at the University of Electro-Communications, a national Japanese university located in Tokyo that specializes in engineering and applied science, and has also been an active member of the Japanese Society for Language Sciences. Most of his research is in the area of conversation analysis for second language acquisition. As a foreign language teacher, he is also interested in critical pedagogy and classroom democracy. Eric has published in Applied Linguistics, the Journal of Applied Linguistics, and Human Studies. His most recent publications include two articles in 2013, in Language Learning and Pragmatics & Language Learning, in which conversation analysis is used with longitudinal data to investigate language development. A third article in 2013, in Pragmatics and Society, explores the use of Japanese during L2 English discussions among Japanese university students.