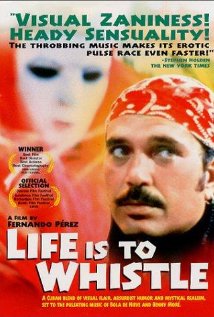 Three characters in present-day Havana must choose between clinging to their self-restricting beliefs, or getting rid of them to live more freely. Ballerina Mariana has promised God celibacy if she gets the role of "Giselle"; Social-worker Julia always faints after hearing a certain word; and pot-smoking percussionist Elpidio was abandoned by his mother, coincidentally named Cuba, some time ago and has not yet gotten over the loss.

In Spanish with English sub-titles.